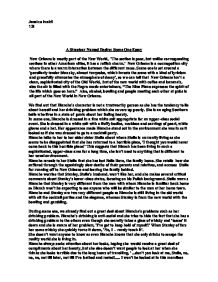 A Streetcar named desire- Chapter one

A Streetcar Named Desire: Scene One Essay New Orleans is mostly part of the New World, 'The section is poor, but unlike corresponding sections in other American cities, it has a raffish charm.' New Orleans is a cosmopolitan city where there is a warm interaction between the different races. Scene one is set around a 'peculiarly tender blue sky, almost turquoise, which invests the scene with a kind of lyricism and gracefully attenuates the atmosphere of decay', so we can tell that New Orleans isn't a clean, sophisticated city of the Old World, but of the new world with coffee and banana's, also the air is filled with the n***o music entertainers, "The Blue Piano expresses the spirit of the life which goes on here." Also, alcohol, bowling and people meeting each other at pubs is all part of the New World in New Orleans. We find out that Blanche's character is not a trustworthy person as she has the tendency to lie about herself and her drinking problem which she covers up poorly. ...read more.

Blanche and Stanley are two very different people as Blanche is still living in the old world with all the cocktail parties and the elegance, whereas Stanley is from the new world with the bowling and gambling. During scene one, we already find out a great deal about Blanche's problems such as her drinking problem. Blanche's drinking is anti-social and she tries to hide the fact that she has a drinking problem to the others even though she secretly takes a glass of whisky and 'tosses' it down and she is aware of her problem, 'I've got to keep hold of myself!' When Stanley offers her some whisky she quickly turns it down, 'No, I - rarely touch it'. She doesn't want anyone to know as even Blanche knows that she only drinks to escape the reality world she is living in. Blanche always seeks attention about her looks, hoping she would receive a great deal of compliments about her beauty, but she also doesn't want people to look at her when she thinks she ...read more.

Also Blanche can be quite nasty in what she says to Stella, which you would expect from sisters when they were at a young age but not from mature adults. 'You've put on some weight, you're more plump as a little partridge!' And again Blanche talks to Stella as if she was her mother, ' You just have to watch around the hips a little'. In this scene what we learn about Stanley is that he is a very carefree person, who won't change his personality to satisfy anyone else. Stanley is from Poland and is very much of the New World. When he speaks he also uses slang in his language and his contrast to Blanche is huge as there is a massive difference between them and the New and Old world. Blanche comes from a very sophisticated background of a variety of garden parties and cocktails, whereas Stanley appears as a lower class citizen to Blanche as Stanley lives very much in a world where alcohol, clubs, s*x and bars and going on dates is acceptable in the area he is from. Jessica Ivaldi 12I ...read more.