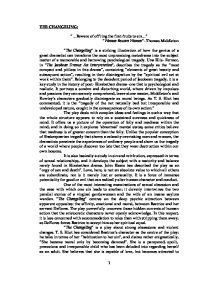 &quot;The Changeling&quot; is a striking illustration of how the genius of a great dramatist can transform the most unpromising melodrama into the subject matter of a memorable and harrowing psychological tragedy.

THE CHANGELING: "...Beware of off'ring the first-fruits to sin..." "Women Beware Women"- Thomas Middleton "The Changeling" is a striking illustration of how the genius of a great dramatist can transform the most unpromising melodrama into the subject matter of a memorable and harrowing psychological tragedy. Una Ellis- Fermor, in "The Jacobean Drama: An Interpretation", describes the tragedy as the "most compact and pitiless in this drama", containing "elements of great beauty and subsequent action", resulting in their disintegration by the "spiritual evil set at work within them". Belonging to the decadent period of Jacobean tragedy, it is a key study in the history of post- Elizabethan drama- one that is psychological and realistic. It portrays a sombre and disturbing world, where driven by impulses and passions they can scarcely comprehend, leave alone master, Middleton's and Rowley's characters gradually disintegrate as moral beings. As T. S. Eliot has commented, it is the "tragedy of the not naturally bad but irresponsible and undeveloped nature, caught in the consequences of its own action." The play deals with complex ideas and feelings in such a way that the whole structure appears to rely on a sustained sureness and quickness of mind. ...read more.

The excitement of her company, combined with the hope for s****l favours in return, is the chief reason for his eagerness to become her instrument of mayhem. Beatrice is delighted, but does not realize that she has actually out-witted herself. It is still too early for her to know that DeFlores is her superior, and that he has her already within his power, and that he foresees the future much more clearly than she does. It is only after Piracquo is slain in a vault in the castle and DeFlores returns with the murdered man's ring still on the finger, that Beatrice realizes with a sense of horror at what she has done, and this embodies in a single image the moral crux of the play. By her involvement with DeFlores in the murder of Piracquo, she has indeed offered the "first fruits to sin" ("Women Beware Women"). She had not anticipated that the murder would involve bloodshed, and she realizes that she is as deeply implicated as DeFlores. She has become the deeds creature. She pleads her innocence in vain, reminding him of the cleavage separating their births, begs him to take all her gold and jewels and, "let me go poor unto my bed with her honour". ...read more.

DeFlores, on the other hand is fully aware of himself. He is driven to murder and blackmail by his l**t, knowing all the time that he is courting damnation. It may be argued that it is better to be conscious of damnation, as DeFlores is, than morally obtuse. His grasp on reality however is not perfect either. His mad scheme to kill Diaphanta alarms even Beatrice, who realizes that it may "endanger the whole house". DeFlores appears to be highly conscious of having sinned against conventional morality, but seems unrepentant. As Tomlinson has put it, he is at once "Middleton's most compelling study in evil and his most remarkable exploration in abnormal psychology". "The Changeling" proves itself to be a play whose depth of focus is unique in the entire gamut of Jacobean drama. Its meaning and significance are the result of a fresh start in Jacobean inquiry, and one which depends a good deal on unswervingly naturalistic attitudes in the verse and dialogue. Together with the rest of Middleton's work it separates itself from Jacobean drama generally; while at the same time it preserves, within the Middleton oeuvre: a separate and distinct identity. As T. S. Eliot has commented in his essay, "Thomas Middleton", it is the "tragedy of the not naturally bad but irresponsible and undeveloped nature, caught in the consequences of its own action." 1 ...read more.