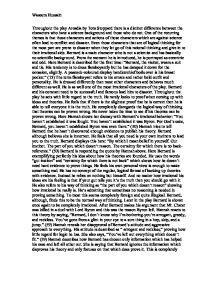 Throughout the play Arcadia by Tom Stoppard there is a distinct difference between the characters who have a science background and those who do not.

Throughout the play Arcadia by Tom Stoppard there is a distinct difference between the characters who have a science background and those who do not. One of the recurring themes is that those characters and actions of those characters which are against science often lead to conflict and disaster. Even those characters that are of logical thinking for the most part are prone to disaster when they let go of this rational thinking and give in to their irrational side. Bernard is a main character who is not a scientist and has basically no scientific background. From the moment he is introduced, he is portrayed as eccentric and odd. Here Bernard is described for the first time: "Bernard, the visitor, wears a suit and tie. His tendency is to dress flamboyantly but he has damped it down for the occasion, slightly. A peacock-coloured display handkerchief boils over is his breast pocket." (73) The term flamboyant refers to his ornate and rather bold outfit and personality. He is dressed differently than most other characters and behaves much different as well. He is as well one of the most irrational characters of the play. Bernard and his constant need to be successful and famous lead him to disaster. Throughout the play he acts with little regard to the truth. ...read more.

Hannah reacts to this theory by saying, "Bernard, I don't know why I'm bothering-you're arrogant, greedy, and reckless. You've gone from a glint in your eye to a sure thing in a hop, skip, and a jump." (59) Hannah reveals her disapproval of Bernard's attitude and aggressive approach to everything. His attitude is described as " arrogant and reckless," proving how little regard for logic he has. She also says, "You've left out everything which doesn't fit." (59) Hannah describes how Bernard has chosen only information which has helped his case and left all other out. She is saying that Bernard ignores the information which disproves his theory and only focuses on that which does prove it. This is completely unscientific and illogical if you want to have limited doubt in your theory. Also in this scene Valentine shares his opinion, "Actually, Bernard, as a scientist, your theory is incomplete." (59) Valentine, the main character who has a large scientific background, also states that Bernard does not have enough evidence to proceed in publishing his theory. Valentine tries to tell Bernard that although he does have some evidence that he does not have nearly enough to proceed in publishing. Despite the advice of others Bernard decides to precede with this theory and publish it no matter now much evidence might be out there to prove it wrong. ...read more.

In this scene we get an idea of why the fire started. Thomasina truly gives herself up to irrational behavior. Her self-control is lost and lets herself become the opposite of what she was determined in the beginning to be. This scene give an idea of why an explanation why never found on her theory. " Take your essay, I have given it an alpha in blind faith. Be careful with the flame." (96) This suggests that the essay, which could possibly have contained her explanation, was the cause of the fire which took her life. When Thomasina became reckless with her emotions she was doomed. For the most part, Thomasina has always been logical and once she became irrational it turned into a disaster that could never be reversed. Science was the root of the disaster as well. Her essay, which was filled with her scientific explanation, was what in the end what caused her death. It can be suggested that because she deviated from her usual rational behavior that the tragedy occurred. In the play Arcadia there is a distinct split between those characters that act rationally and those who do not. For the most part this split can be seen on the basis of scientific background of each character. Those characters with little science knowledge act more irrationally and those with science background act rationally. It even showed how those characters that usually act rationally can those that rationality with the lose of science. Waseem Hussain ...read more.