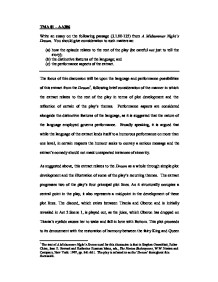 TMA 01 - AA306 Write an essay on the following passage (3.1.80-135) from A Midsummer Night's Dream. You should give consideration to such matters as: (a) how the episode relates to the rest of the play (be careful not just to tell the story); (b) the distinctive features of the language; and (c) the performance aspects of the extract. The focus of this discussion will be upon the language and performance possibilities of this extract from the Dream1, following brief consideration of the manner in which the extract relates to the rest of the play in terms of plot development and the reflection of certain of the play's themes. Performance aspects are considered alongside the distinctive features of the language, as it is suggested that the nature of the language employed governs performance. Broadly speaking, it is argued that while the language of the extract lends itself to a humorous performance on more than one level, in certain respects the humour seeks to convey a serious message and the extract's comedy should not mask unexpected instances of sincerity. As suggested above, this extract relates to the Dream as a whole through simple plot development and the illustration of some of the play's recurring themes. ...read more.

The hyperbole, which characterises Flute's speech, also replicates the exaggerated effusiveness of the courtiers, such as Hermia's oaths in Act 1 (1.1.168-178). The comical rehearsal of the tragic story of Pyramus and Thisbe can in turn be seen to parody the attempted flight of Lysander and Hermia from Athens. I would suggest that the principal challenge for a performance of Flute, as Thisbe, is to convey the immediate comedy inherent in the language, through the jumbled descriptions and deep sense of irony, while effectively parodying the courtiers. Flute performs in earnest (though undoubtedly mocked by the other clowns). In contrasting with the ridiculousness of what he says, this earnestness is fundamental to achieving a level of comedy. It is also fundamental in parodying the courtiers, replicating the earnestness with which they profess their love of each other. An interesting tool to emphasise the parody could be an attempt by Flute to mimic the voice of Hermia or to rehearse in clothing similar to that of Hermia. Proceeding to lines 92 to 105, it is necessary to consider the features of the language, which Puck uses, how this contrasts with that of the clowns and how Puck's language, in particular, permits alternative performance possibilities. ...read more.

and that he is 'neither' wise nor beautiful (3.1.132). His reflection on the fact that 'reason and love keep little company together nowadays' (3.1.128) has considerable weight both in the context of Titania's behaviour and the shifting affections of the courtiers. The exchange between Titania and Bottom also lends itself, therefore, to a humorous interpretation. However, while the focus of the humour may initially be Bottom, the challenge in performance is to shift that focus onto Titania, drawing out the ridiculousness of her words while emphasising the sincerity with which Bottom speaks and permitting his moment of reflection to emerge. Though Bottom's lines may raise laughs for their deadpan delivery, it is important that the laughs be on Titania. In concluding this discussion, it is suggested that this extract functions on a number of levels in relation to the Dream as a whole. On a basic level, it progresses certain of the play's plots. It provides for a moment of comedy between scenes dominated by the courtiers but also reflects on those scenes in the manner in which it mocks the behaviour of the courtiers. In this sense, perhaps most significantly, and particularly through the exchange between Bottom and Titania, it inverts traditional hierarchical and social structures, with superficially 'comic' characters utilised to position 'serious' characters as foci of humour. ...read more.

This essay is exceptionally well written and supported with external references; however the reason it does not gain top marks is due to the amount of words wasted not really saying anything about the play in relation to the question. The most important thing in an analytical essay is the exploration of the key ideas of language, structure and form and there needs to be more of this in this response.
4 Stars