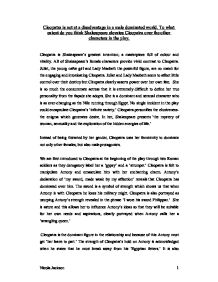 Cleopatra is not at a disadvantage in a male dominated world. To what extent do you think Shakespeare elevates Cleopatra over the other characters in the play.

Cleopatra is Shakespeare’s greatest invention; a masterpiece full of colour and vitality. All of Shakespeare’s female characters provide vivid contrast to Cleopatra. Juliet, the young naïve girl and Lady Macbeth the powerful figure, are no match for the engaging and intoxicating Cleopatra. Juliet and Lady Macbeth seem to affect little control over their destiny but Cleopatra clearly asserts power over her own fate.  She is so much the consummate actress that it is extremely difficult to define her true personality from the façade she adopts. She is a dominant and sensual character who is as ever-changing as the Nile running through Egypt. No single incident in the play could encapsulate Cleopatra’s ‘infinite variety.’ Cleopatra personifies the elusiveness- the enigma which generates desire. In her, Shakespeare presents ‘the mystery of woman, sensuality and the exploration of the hidden energies of life.’

Instead of being thwarted by her gender, Cleopatra uses her femininity to dominate not only other females, but also male protagonists.

We are first introduced to Cleopatra at the beginning of the play through two Roman soldiers as they derogatory label her a ‘gypsy’ and a ‘strumpet.’ Cleopatra is felt to manipulate Antony and emasculate him with her enchanting charm. Antony’s declaration of ‘my sword, made weak by my affection’ reveals that Cleopatra has dominated over him. The sword is a symbol of strength which shows us that when Antony is with Cleopatra he loses his military might. Cleopatra is also portrayed as usurping Antony’s strength revealed in the phrase ‘I wore his sword Philippan.’  She is astute and this allows her to influence Antony’s ideas so that they will be suitable for her own needs and aspirations, clearly portrayed when Antony calls her a ‘wrangling queen.’

Cleopatra is the dominant figure in the relationship and because of this Antony must get ‘her leave to part.’ The strength of Cleopatra’s hold on Antony is acknowledged when he states that he must break away from his ‘Egyptian fetters.’ It is also important to note that the Romans fear her power over their general and violates their preconceived notions of masculinity.

Cleopatra is never at a disadvantage in a male dominated world. She is very much a consummate actress and this is shown when Antony has to tell her that he will have to return to Rome. She is greatly enraged and feels that there has never been a queen ‘so mightily betrayed.’ Antony is not allowed to speak during her fiery tirade and her dominance is clearly asserted. Cleopatra is very accomplished and knows when she has to act either upset or angry. When Antony leaves Cleopatra says ‘I am quickly ill and well-/ so Antony loves.’

Cleopatra acts melodramatically when a messenger arrives from Rome with the news of Antony’s new marriage and she says ‘if thou say so, villain, /thou kill’st thy mistress.’ She is livid when the messengers tells her of the marriage to Octavia and she sends ‘the most infectious pestilence upon’ the messenger and strikes him down. We are allowed to see her theatrical side when she says ‘I faint! O Iras, Charmain!’ Even though Antony has now married for political reasons his soldiers are sure that he will return once again to his ‘Egyptian dish.’ Even when Antony is far from Cleopatra, she exerts her magic influence over him.

Cleopatra utilises her sexuality and charisma to elevate herself over the other men and women within the play. The unapologetic openness of Cleopatra’s sexuality stands to threaten the Romans, however they are equally obsessed with the power of Octavia’s sexuality. In beauty and temperance she is the opposite of Cleopatra however, she is thought to possess the power to mend the damaged relationship of the triumvirs. Because of Octavia and Antony’s marriage the future of the Roman Empire has narrowed down to a dependence on Antony’s treatment on Octavia. Octavia is used to cement the Roman world and to ‘knit your hearts with an unslipping knot.’  This is the opposite of Cleopatra due to the fact that she would always want to be the most assertive partner in the relationship and she would not allow herself to be overpowered or be manipulated by a man.

Shakespeare uses the other women to show the depth of Cleopatra’s passion and her power and determination in everything that she partakes. She outshines all the other women in the play. She orders the Roman messenger to reveal Octavia’s character and her appearance. Shakespeare’s description of Octavia reveals to us a negative impression- no match for the ‘deity’ that is Cleopatra. She is a very pious and exemplary Roman woman. She feels torn between her husband and her brother as she has to ‘pray for both parts.’ It is also interesting to note the audience’s reaction to the ‘holy still and cold’ Octavia. Pity and sympathy are felt for her as she becomes a mere pawn in the hands of her brother.

These two characters are polar opposites. Cleopatra is a seductress who favours high drama and who really does adore Antony. Octavia married Antony in order to cement the alliance between Antony and her brother, Caesar.

Enobarbus is used in the play to elevate Cleopatra. Even though he is a Roman, he cannot hide his admiration for her. Enobarbus recalls that on the day that they met Cleopatra ‘pursed up’ Antony’s heart. She was the first woman who could say ‘no’ to the ‘noble Antony.’ Agrippa, another Roman, makes accusations that she made ‘great Caesar lay his sword to bed.’ Even when people thought that Antony would stay with Octavia, Enobarbus always knew that he would once again return to his ‘Egyptian dish.’ Enobarbus elevates her and equates Cleopatra to a goddess using the colours of royalty ‘the oars were silver’ and ‘purple the sails.’  Her barge consumes and dominates Antony and ‘the winds were love-sick with them.’

Cleopatra’s triumph over Caesar is a testament to her strength and it highlights the fact it was she who dictated the rules within a male-dominated world. Shakespeare uses his language to manipulate the audience’s reaction into admiring Cleopatra and loathing Caesar. He uses the protagonists to show us the noble nature of Cleopatra and the cruelty of Caesar. When Antony and Caesar go to war Cleopatra gives Antony Egyptian ships and soldiers. Enobarbus does not feel that she should be there as she will ‘puzzle Antony’ and also she may distract him from the job which he is meant to be doing. Canidius feels that they are ‘women’s men’ and they are controlled by them. During the flight Cleopatra flees with her troops and this summons Antony to follow and because of this they lose the battle.

After the defeat, Caesar wants to capture Cleopatra and persuade her to murder ‘the noble Antony.’ He wants her to give up her crown and become subordinate to him. Caesar also believes that Cleopatra will be easily swayed stating ‘women are not/ in their best fortunes strong, but want will perjure/the ne’er touch’d vestal.’

However, Cleopatra knows how she can manipulate Cesar which puts her as an advantage in a male dominated world. Antony is told of the news about Cleopatra and the news that she has agreed to murder him for Caesar. He says that ‘fortune and Antony part here’ and he thinks that he has now left everything that he once had. He is furious and calls her a ‘triple turned whore!’ He feels that she is the ‘false soul of Egypt’ and he feels that Cleopatra has left him. Characteristically even in the panic she wants to win Antony over by play acting. When Antony hears this news of Cleopatra’s death he feels great sorrow and does not know how he should react to the news of the death of the one person who he loves in his life. He says:

‘The courage of a woman; less noble mind

Than she which, by her death, our Caesar tells

‘I am conqueror of myself.’

Antony feels deep sorrow and pronounces that he cannot live if Cleopatra, the ‘enchanting queen’, was no longer alive. When Cleopatra sends a messenger to tell Antony that she is not dead it is too late as he has already fallen onto his own sword in an attempt to join Cleopatra. He is transported by his soldiers to Cleopatra’s funeral monument where Cleopatra says that if her lips had ‘that power’ then she would kiss him to be able to have him alive forever. In his death Cleopatra elevates Antony and we see him as a god-like figure. She tells us that ‘our lamp is spent’ and that she wants Antony to be honoured with a Roman burial. She refuses to travel to Rome and face the remaining triumvir, Caesar.  The ‘jewel’ has been ‘stolen’ and we have been given the opinion that both the Roman and Egyptian worlds will never be the same again. She truly loves Antony and Shakespeare tells us that the ‘noblest of men’ has been taken from us. We learn through Cleopatra’s speech that there is ‘nothing left remarkable beneath the visiting moon.’ Now that Antony has left the earth there is nothing left that can surprise us or amaze us the way that he did. He was made noble again in death and he shed the ‘most noble blood.’ Through these quotes we are shown the extent to which Cleopatra is truly devoted to Antony and the sadness and sorrow that she feels when he eventually dies. The blank verse and iambic pentameter helps to aggrandise Cleopatra’s speech. Cleopatra is a truly fitting partner for the god-like figure of Antony.

Shakespeare uses elevated poetry to show how Cleopatra reacts in the moments near her eventual suicide. Both Antony and Cleopatra are elevated and they both rise to the pinnacle of their lives in their death. Caesar exalts Cleopatra in her death stating that there will be ‘high order in this solemnity’ and his admiration is evident through his action that ‘Our army shall/in solemn show attend this funeral.’

Cleopatra will never allow herself to be out witted by the ‘valiant Caesar.’ When he thought that he was manipulating her and persuading her into murdering the love of her life we find out that she is the person who is able to manipulate one of most able politicians in the world. She never gives him any clues to the fact that she will not follow through with her promise that she will kill the one that she loves. She also conquers  him at the end of her life when she is able to smuggle in a basket full of asps without the Roman guards noticing that something is not right. She chooses the noble way to die and her righteousness is shown through her death. The phrase ‘I hear him mock/the luck of Caesar’ shows us that Cleopatra feels that Caesar will be mocked because of the death of Antony and Cleopatra.  It is at this moment in the play that Cleopatra is elevated over both the men and the woman within the play.