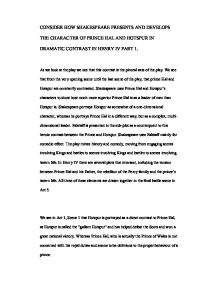 Consider How Shakespeare Presents and Develops the Character of Prince Hal and Hotspur In Dramatic Contrast In Henry IV Part 1.

CONSIDER HOW SHAKESPEARE PRESENTS AND DEVELOPS THE CHARACTER OF PRINCE HAL AND HOTSPUR IN DRAMATIC CONTRAST IN HENRY IV PART 1. As we look at the play we see that this contrast is the pivotal axis of the play. We see that from the very opening scene until the last scene of the play, that prince Hal and Hotspur are constantly contrasted. Shakespeare uses Prince Hal and Hotspur's characters to show how much more superior Prince Hal is as a leader of men than Hotspur is. Shakespeare portrays Hotspur as somewhat of a one-dimensional character, whereas he portrays Prince Hal in a different way, but as a complex, multi-dimensional leader. Falstaff is presented in the sub-plot as a counterpoint to this heroic contrast between the Prince and Hotspur. Shakespeare uses Falstaff mainly for comedic effect. The play mixes history and comedy, moving from engaging scenes involving Kings and battles to scenes involving Kings and battles to scenes involving tavern life. In Henry IV there are several plots that intersect, including the tension between Prince Hal and his Father, the rebellion of the Percy family and the prince's tavern life. All three of these elements are drawn together in the final battle scene in Act 5. We see in Act 1, Scene 1 that Hotspur is portrayed as a direct contrast to Prince Hal, as Hotspur is called the "gallant Hotspur" and has helped defeat the Scots and won a great national victory. Whereas Prince Hal, who is actually the Prince of Wales is not concerned with his royal duties and seems to be oblivious to the proper behaviour of a prince. We see almost instantly from Act 1 Scene 1 that Prince Hal is a great disappointment to King Henry, The King even admits to being envious of Lord Northumberland's son Hotspur. He describes Hotspur as being "A son who is the theme of honour's tongue, Amongst a grove the very straightest plant, Who is sweet fortune's minion and her pride, Whilst I, ...read more.

that Prince Hal is going to throw his "loose behaviour", Shakespeare uses this scene to show that Prince Hal is determined to redeem himself, and will do so at Hotspur's expense. "I will redeem all this on Percy's head And in the closing of some glorious day Be bold enough to tell you that I'm your son" We also see great flaws in Hotspur's character in Act 3 Scene 1 as we see he is very argumentative, within minutes of Hotspur and Owen Of Glendower, who was helping with the rebellion, meeting each other Hotspur argues over Glendower's supposedly magic powers. "If thou have power to raise him, bring him hither" We see that Hotspur and Glendower then have arguments about the division of the land as well. We see from the exchanges between Hotspur and Glendower that Hotspur doesn't have a cool head as he shows he is angered easily "Sometimes he (Glendower) angers me" The Fourth Act is an act of preparation, were we witness the different characters making their plans for war. In Act 4 Scene 1, we see different sides of Hotspur again as we see how angry he gets when he hears by letter that his father cannot join in the fighting. Although he's angered at first he foolishly and rashly feels he can use this serious disadvantage to his advantage, he is extremely unrealistic. "I rather of his absence make use It lends a lustre and more great opinion A large dare to our great enterprise." We clearly see his overconfidence, as we hear the Kings army is approaching, with vastly superior forces. We see in Act 4 Scene 1 that Prince Hal is getting under Hotspur's skin as Hotspur talks scornfully and even talks as if Prince Hal is beneath him. "The nimble footed madcap Prince Of Wales And his comrades that daff'd the world aside And bid it pass?" ...read more.

The play ends on planning to completely defeat the rebellion. As we look throughout the play as a whole we see that Shakespeare used Prince Hal and Hotspur as the main characters and were the pivotal storyline in the play as Hal was regarded as a waster and too have a lack of gentlemanly traits, whereas Hotspur was a Golden Boy, and showed fierce courage, bravery and honour. As the play progressed however our opinions were changed by Shakespeare who as each play went by we seen Hotspur get weaker and we seen Prince Hal get stronger. Not in physical terms but more the mentality of both characters and their traits, Hotspur from the start always had a huge problem within his many great traits lay a major flaw and that was perhaps that he was too courageous, too brave and too honourable. We seen this be his ultimate downfall, as he knew that when many of his troops backed out over various reasons he knew that he would and could not win, but instead of pulling back and waiting for reinforcements he was blinded by the good name that he got for Honour and bravery. Other flaws appeared as well such as his temperament, Shakespeare used all these factors to show us that Hotspur wasn't the man whom we had seen in the first scene, that man was like a complete warrior with no flaws but by the end of the play we seen him as quick-tempered and impatient, Hotspur is obsessed with the idea of honour and glory to the exclusion of all other qualities. Shakespeare portrayed Hal as somewhat of a waster who wasn't really good for much but as the play progressed and Hotspur showed more and more flaws in his character Prince Hal on the other hand showed more and more qualities to his character as he emerges as a heroic young Prince. We see that Hal is quite clearly intelligent and uses his brains a lot more than Hotspur as before they even met we seen that Hal had beat him by using mind games. . ...read more.