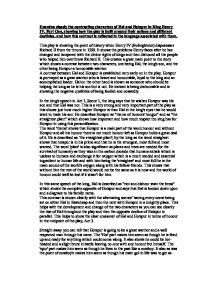 Examine closely the contrasting characters of Hal and Hotspur in King Henry IV, Part One, showing how the play is built around their actions and different destinies, and how this contrast is reflected in the language associated with them.

Examine closely the contrasting characters of Hal and Hotspur in King Henry IV, Part One, showing how the play is built around their actions and different destinies, and how this contrast is reflected in the language associated with them. This play is showing the point of history when Henry IV (Bolingbroke) disposesses Richard II from the throne in 1399. It shows the problems Henry faces after he has changed and tampered with the divine rights of kings and then dishoned all the people who helped him overthrow Richard II. This creates a great main point to the story which shows a contrast between two characters, one being Hal, the king's son, and the other being Hotspur a honourable warrior. A contrast between Hal and Hotspur is established very early on in the play. Hotspur is portrayed as a great warrior who is brave and honourable, loyal to the king and an accomplished leader. Hal on the other hand is shown as someone who should be helping the king as he is his son but is not. He insteed is being dishourable and is showing the negative qualitites of being foolish and cowardly. In the king's speech in Act 1, Scene 1, the king says that he wishes Hotspur was his son and that Hal was not. This is a very strong and very important part of the play as this shows just how much higher Hotspur is than Hal in the king's eyes that he would want to trade his son. He describes Hotspur as "theme of honours' tongue" and as "the straightest plant" which shows how important and how much respect the king has for Hotspur in using this personification. ...read more.

But his main weaknesses are his lack of planning which will have great effect on the rebellon he is running: "I forgot the map!" and also the way he allienates his allies which will also lead to the same downfall and failure to the rebellion. A lack of planning shows a old trait of a warrior and not that of a politician which as shown by Hal is a new and effective way to shape life and succeed in life. The way he allienates his allies also shows how egolistic he is as he thinks he doesn't need anyone else as he on his own can do anything he wants and succeed in anything in life no matter what the chances of failure are: 'We'll fight tonight'; Act IV, Scene III, where the other members of the rebellion say to fight tomorrow when they have more men and a greater chance but Hotspur is not interested in numbers and planning but only himself and fighting. All the time Hotspur is on the downfall coming up to the rebellion Hal is on the rise thanks to his calculating and futuristic mind which he uses to plan the future to his advantage. This political and machievellian side shows his planning ability which will help him to defend his father, king Henry, in the rebellion and rescue him from a complete dishonourable life. The machievellian side indicates how good he is at acting and indicates tht he is actually acting to be part of the rough lowlife community when actually he is using it to his advantage as when he becomes honourable and a good king the contrast between the two different Hal and Prince Harry sides will be so drastic that everyone will see him as a much better king ...read more.

The King tells of his forgiveness to Hal after he saves his life by saying that Hal has: 'redeem'd thy lost opinion'. The king uses the financial word of 'redeem'd' to show of the change to the new world and to show that Prince Harry is a political hero in the eyes of the king. Also, in saying this the king is forgiving him and allowing him to have a new start at being a Prince. Hal finally replies to the king by closing the soliloquy of that of princely debt by accepting that it was his debt and even if he never pomised it he still had to pay it to be a good Prince: 'never promiseth but he means to pay' Hal then finishes his transformation into a Prince by defeating Hotspur in single-compact. But during the time in which Hotspur is finally dying and has lost his honour he relises it means nothing to you once your dead but still can only accept the lose of his life to Prince Harry over the lose of his honour. Once Hotspur is dead the Prince regains the traits of a true prince and pays respect to Hotspur after he dies and then covers his face as a final show of respect: 'But let my favours, hids thy mangles face'. Hal then refers to himself as the Prince for the first time and this symbolised a complete change: 'I am the Prince of Wales'. A truely transformed Prince Harry then backs up a total transformation by releasing and showing remorse on Douglas who fought against him and the king as part of the rebels in the rebellion and then finally rides of to fight Glendower with the king to show him and his father as true political royals side by side as they should be. ...read more.