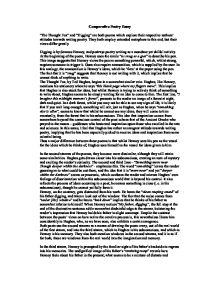 Comparative Poetry Essay "The Thought Fox" and "Digging" are both poems which explore their respective authors' attitudes towards writing poetry. They both employ extended metaphors to this end, but their views differ greatly. Digging is by Seamus Heaney, and portrays poetry writing as a mundane yet skilful activity. At the beginning of the poem, Heaney uses the simile "as snug as a gun" to describe his pen. This image suggests that Heaney views the pen as something powerful, which, whilst strong, requires someone to trigger it. Guns also require ammunition, which is supplied by the user. In this analogy, the ammunition is Heaney's ideas, which he 'fires' at the paper using the pen. The fact that it is "snug" suggests that Heaney is not writing with it, which implies that he cannot think of anything to write. The Thought Fox, by Ted Hughes, begins in a somewhat similar vein. Hughes, like Heaney, mentions his stationery when he says "this blank page where my fingers move". This implies that Hughes is also stuck for ideas, but whilst Heaney is trying to actively think of something to write about, Hughes seems to be simply waiting for an idea to come to him. The first line, "I imagine this midnight moment's forest", presents to the reader an image of a forest at night, dark and quiet. ...read more.

The use of language here - employing the word "away" instead of a more typical word such as "ago" - makes the reader feel as though Heaney is very distanced from his past, and has perhaps tried to put it behind him. He grew up on his family's farm, winning a scholarship to St. Columb's College when he was 12. Heaney later described his move from the farm to the school as moving from "the earth of farm labour to the heaven of education," which implies that farm labour, despite any expectations his family might have of him, was not something which he excelled at. This no doubt made him feel insubstantial and insecure, which explains why his childhood would be something he would wish to forget. Heaney moves on to set the scene - his father is digging again, but instead of in flowerbeds, he is now digging potato drills. The memory continues into the fourth stanza, in which words and phrases such as "lug", "shaft" and "rooted out tall tops" emphasise that he is slipping back more completely into the memory, and using his father's terminology as he no doubt did when he was young. Moreover, an admiring tone seeps into his language, which is a stark contrast to the disdain of previous stanzas. We can see that whilst Heaney feels differently about his father in the present, he once admired him as every small boy admires his father. ...read more.

The absence of the simile is significant because it implies that he has accepted the value of writing poetry and no longer needs to glamorise his pen - in the final stanza it is simply a pen. Hughes is brought out of his subconscious by the "sudden sharp hot stink of fox" which occurs when the idea suddenly comes to him. Like in Digging, this language is also very sensuous, but much more abrupt than the more nostalgic descriptions of the poet's childhood. He ends the poem with the words "The page is printed", showing that he has successfully taken the thought and used it. Something obvious to anyone who reads these poems is that they are written in very different ways. The Thought Fox feels very magical and strange, whilst Digging is mundane and ordinary. This seems to reflect how the poets feel about the process of writing a poem. On the one hand, Hughes sees it as a gift, something given to him by some deity on a higher plane, whilst on the other hand, Heaney sees as something to be striven for - a conscious effort, not dissimilar to manual labour. In my opinion, neither poem is better than the other; they are both very pleasing to read. Whilst I enjoyed reading The Thought Fox more, and felt that it is more engrossing and almost exotic, I concur with the views on writing poetry which are set out in Digging; that ideas have to be found, not simply waited for. ...read more.