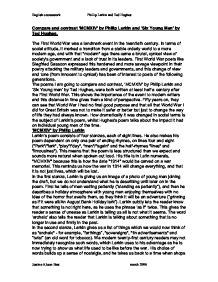 Compare and contrast 'MCMXIV' by Philip Larkin and 'Six Young Men' by Ted Hughes. The First World War was a landmark event in the twentieth century. In terms of social attitude, it marked a transition from a stable orderly world to a more modern age, and with that "modern" age there came a brutal, cynical view of society's government and a lack of trust in its leaders. First World War poets like Siegfried Sassoon expressed this hardened and more savage viewpoint in their poetry attacking the military leaders and governments, and this change of view and tone (from innocent to cynical) has been of interest to poets of the following generations. The poems I am going to compare and contrast, 'MCMXIV' by Philip Larkin and 'Six Young men' by Ted Hughes, were both written at least half a century after the First World War. This shows the importance of the event to modern writers and this distance in time gives them a kind of perspective. Fifty years on, they can see that World War I had no final good purpose and that all that World War I did for Great Britain was not to make it safer or better but just to change the way of life they had always known. How dramatically it was changed in social terms is the subject of Larkin's poem, whilst Hughes's poem talks about the impact it had on individual young men of the time. ...read more.

Larkin uses the word 'never' three times, "never such innocence", "never before or since" and "never such innocence again". He repeats this word to show what has been lost, a world that can never be recaptured. This repetition underlines to the reader that lives, values, and standards were destroyed by the war. The innocence is betrayed ("changed itself to past"). Larkin reinforces that life would never be the same after 1914 and how it had a massive impact on lives. It's only in the last stanza that the reader can see that Larkin is telling us about a wartime photo and how no-one then knew just how much life would change, that the men who thought it was an adventure would never return and that the marriages would only last "a little while longer". 'Six Young Men' by Ted Hughes Hughes's poem is four stanzas long, each made up of nine lines. This is an unconventional structure for poetry, and at first it appears as if it is even more relaxed in structure than Larkin's poem. However, when we look more closely we can see that it is actually more controlled than Larkin's poem, because every line ends in a "half-rhyme" (where the consonant matches but the vowel doesn't). For example, in the first stanza there are the endings "well", "smile", "fashionable" and "bashful", then "friends" and "hands", then "tinged", "pride" and "dead". ...read more.

Hughes continues with his use of brutal and horrific words, giving the reader some unpleasant images ("no thought so vivid as their smoking blood" and "such contradictory permanent horrors") in order to give his poem more impact. Almost every line contains a contrast from alive to dead, from calmness to violence, and the poem's message is that the change is so puzzling to us that it takes us out of our own modern age and makes us try to put ourselves in their place ("shoulder one's own body from its instant and heat"). In conclusion, I would say that I prefer Philip Larkin's poem "MCMXIV" to Ted Hughes's "Six Young Men". Ted Hughes' poem felt very repetitive sometimes. I thought he was saying the same thing over and over again at the end of every stanza without making his message deeper or more interesting. The violence is also too graphic and doesn't really move me. Larkin's view of the war is more subtle but he still gives us an insight to the war and his version of life is more realistic. "Leaving the gardens tidy" is a very sad little personal detail because it seems so pointless and innocent and I think it rings more true than Hughes's general descriptions of corpses and grenades. ?? ?? ?? ?? English coursework Phillip Larkin and Ted Hughes Justine Alison Best march 2006 ...read more.

There is some detailed analysis of the two poems in this essay, demonstrating good overall understanding of the texts. Context is generally well integrated and relevant. However, there are points for improvement:
1) The structure of the essay does not enable detailed poetic analysis or comparisons between the two poems. When analysing two texts, it is best to consider certain poetic aspects and use a paragraph to compare and contrast the use of this technique in both poems. For example, the writer could have have compared how both poets use photographs to tell their story, use of imagery, structure, narrators and tone of voice, the natural world/environment etc, and use these as separate points for exploration.
2) Ideally, all points need to contain a clear topic sentence which outlines the content of the paragraph (which would be comparative in this essay), textual evidence, and analysis. In this case, contextual reference might also be relevant.
3) Due to the chronological approach, the writer often becomes descriptive rather than analytical.
4) Use of quotations needs to be apt, brief and well embedded into the essay.