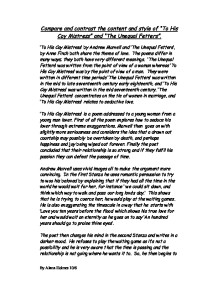 Compare and contrast the content and style of &quot;To His Coy Mistress&quot; and &quot;The Unequal Fetters&quot;.

The last stanza of To His Coy Mistress, starts with the words "now therefore" suggesting an alternative to the horror of the last nightmarish images. Marvell here tries to conclude his thoughts and offer an alternative to the previous ideas. He asks her to sleep with him before time runs out and compares himself to "strength" and her to "sweetness." His tone varies in this stanza from flattery and fear. He feels that now is the time to do it while they an item and young he says "And now, like amorous birds of prey," this means he wants to eat her up greedily like love birds. He doesn't see the point in having the power and not using it. He wants to use the passion and energy. He refers to "iron gates" which gives the image of being locked out meaning that once you are dead there is no going back. "To His Coy Mistress" is written in enjambment; this is when the end of the line is not punctuated but flows into the next examples of this are lines 3, 5, 6,7,21 etc. He uses enjambments because it helps to sub stain the argument because it is continuous. He also uses rhyming couplets for the pace and rhythm, this is done for built momentum- it builds the drive of the argument. He also uses definite rhyming couplets effectively to convey his inner feelings: "My vegetable love should grow it Vaster that empires and more slow". ...read more.

The third verse makes it clear about her feelings of the inequality and shows her anger towards men by writing, "Free as Nature's first intention was to make us, I'll be found, Nor by subtle Man's invention Yield to be in fetters bound". This means that when a female is born she is born free but then because of men fooling you into there sincere love and into marriage, women are trapped by men. The final verse of "The Unequal Fetters" she concludes that "Marriage does but slightly tie men Whilst close prisoners we remain". She means that women are chained by marriage while men are free and can stretch "At the full length of all their chain." "The Unequal Fetters" refers to the unequal lengths of chain men and women have. Her poem shows how wrongly men treat women just as in "To His Coy Mistress". Anne Finch writes her poem in a frank manner whereas Andrew Marvell writes in a sick, perverted and threatening manner. The writer of "To His Coy Mistress" seems to be quite a selfish writer on the other hand the writer of "The Unequal Fetters" writes an honest version of her own true feelings. "The Unequal Fetters" is written in caesura with every other line rhyming which contrasts to "To His Coy Mistress" which is written in enjambment. Even though "The Unequal Fetters" is quite a short poem it has a very powerful message. Both poems have their differences along with their similarities which makes them a perfect comparison, each with their own views. By Alana Holmes 10/6 ...read more.