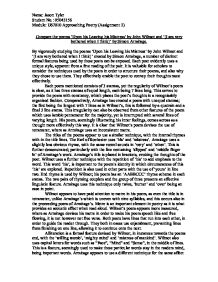 Compare the poems 'Upon his Leaving his Mistress' by John Wilmot and '[I am very bothered when I think]' by Simon Armitage.

Wilmot appears to have paid attention to metre in his poem, as even the title is in tetrameter, unlike Armitage's which is uneven with nine syllables, and this occurs also in the proceeding poem of Armitage's. Metre is an important element in poetry as it is what provides an acoustic effect when read aloud. Wilmot's poem appears more measured, where as Armitage devises his metre in order to make his poem speech like and free flowing, it is not however not free verse. Both poets have lines that run into each other, in order to guide the reader through. They both in cases use enjambment, preventing lines from finishing on one line, allowing it to continue onto the next. Alliteration is a formal feature devised by Wilmot, in instances towards the poems end, with the 'willing womb', 'mighty mind' and 'mistress of mankind'. Wilmot also uses capital letters for words such as "Face", "Mind" and "Sense", in the middle of lines. ...read more.

Both poems develop progressively in their 3 stanzas. Wilmot firstly discusses his feelings upon his mistress; he then goes on to widen his thoughts onto all women by saying "Spirits of your s*x". At the end of the second stanza he begins talking in an even more grandiose fashion, continuing this into the last by saying "Mistress of Mankind". Armitage uses a similar technique in allowing the poem to develop stanza by stanza, allowing the poem to be sectioned into certain parts. He begins with his thoughts on an event, then explaining the consequences, and in the final stanza explains his actions in order to complete the sequence. Armitage and Wilmot, use this to structure their poems into divisions to be recognised by the reader. In conclusion both Wilmot and Armitage in the poems discussed employ several formal features. These include repetition, sound patterning, different rhyme forms, stress on certain syllables to create particular metres and alliteration. Formal features are devised to provide meaning, acoustic effects and aesthetic effects to the poems. Name: Jason Tyler Student No.: 05043156 Module: U67010 Approaching Poetry (Assignment 2) ...read more.