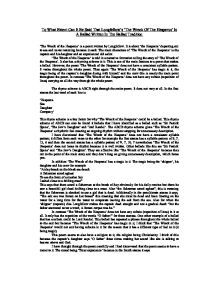 To What Extent Can It Be Said That Longfellow's 'The Wreck Of The Hesperus' Is A Ballad Written In The Ballad Tradition.

The tragic being the 'skipper', his daughter and his crew for example "At day break on the bleak sea-beach A fisherman stood aghast To see the form of a maiden fair Lashed close to a drifting mast" This says that there stood a fisherman at the break of day obviously for his daily routine but there he saw a beautiful girl dead drifting close to a mast. Also "the fisherman stood aghast", this is meaning that the fisherman is shocked to see a girl that is dead. Additionally in the penultimate stanza it says, "The salt sea was frozen on her breast" this meaning that she must be dead and been floating on the water for a long time for the water to evaporate leaving the salt from the sea. Also for when the 'skipper' (captain) dies Longfellow makes the captain dead straight and not a gradual death "but the father answered never a word, A frozen corpse was he." ...read more.

To conclude of what I think that 'The Wreck of the Hesperus' is a ballad clearly written to the traditional formation of a ballad. This is a ballad because it tells a definite story of a ship called The Hesperus and it sinks in a hurricane and it has a definite rhyme scheme. It has a tragic, tragic being the captain's daughter, him and the crew dieing. This seems to be the main point of the ballad. The ballad appears to concentrate on the captain and his daughter. Yet it is hard to distinguish that the captain is actually the villain. This is reason why he ties his daughter to the mast and not taking her to safety. It has most of the characteristic to what makes a brilliant ballad. The characteristics that he left out didn't change how good the ballad is. On my opinion it is certain that 'The Wreck of the Hesperus' near the top ballads ever written. ?? ?? ?? ?? ...read more.