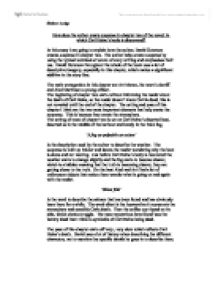 How does the author create suspense in chapter two of the &quot;Snow Falling on Cedars&quot;, in which Carl Heine's body is discovered?

How does the author create suspense in chapter two of the novel, in which Carl Heine's body is discovered? In this essay I am going to explain how the author, David Guterson creates suspense in chapter two. The author helps create suspense by using the typical technical structure of story writing and emphasises their use. David Guterson throughout the whole of the book uses a lot of descriptive imagery, especially in this chapter, which makes a significant additive in the story line. The main protagonists in this chapter are Art Moran, the town's sheriff and Abel Martinson a young officer. The beginning of chapter two starts without informing the reader about the death of Carl Heine, so the reader doesn't know Carl is dead, this is not revealed until the end of the chapter. ...read more.

'Silent fish' Is the word to describe the salmon that has been found and has obviously been there for a while. The word silent is the keyword as it represents the atmosphere and possibly Carls death. Then the coffee cup tipped on its side, which shows struggle. The most mysterious item found was the battery dead that I think is symbolic of Carl Heine being dead. The pace of this chapter starts off very, very slow which reflects Carl Heine's death. David uses a lot of history when describing the different characters, not to mention the specific details he goes in to describe them. 'The sheriff was a lean figure, unimposing, who habitually chewed a stick of juicy fruit gum' Is just one example of the description used. ...read more.

The language often stays the same throughout the chapter, but in this sense it helps the reader create a vivid image or picture of the person in your head. The language is also very repetitive which builds up the atmosphere in a sense of panic. The author then leaves Carls face as the last thing the two see and the fact that they don't want to see it and they will have to eventually, is this sense of realisation. Not just for Abel and Art but for the reader, as it is such an intimate chapter. So therefore as seen the author very cleverly creates suspense by using and changing the language, pace, setting and using the characters wisely which makes this chapter more effective as it leaves the reader asking questions like, Why is the boat there? where's Carl Heine? And most importantly what's going to happen next? All these answered are eventually found out in the end of chapter two. Shekera Lodge ...read more.