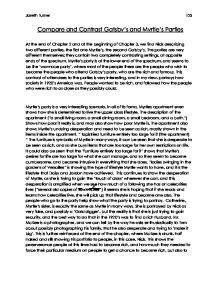 Compare and Contrast Gatsby's and Myrtle's Parties At the end of Chapter 2 and at the beginning of Chapter 3, we find Nick describing two different parties, the first one Myrtle's, the second Gatsby's. The parties are very different themselves; they contain two completely contrasting settings, at opposite ends of the spectrum. Myrtle's party is at the lower end of the spectrum, and seems to be the 'wannabe party', where most of the people there are the people who wish to become the people who attend Gatsby's party, who are the rich and famous. This contrast of attendees to the parties is very interesting, and in my view, portrays how society in 1920's America was. People wanted to be rich, and followed how the people who were rich to as close as they possibly could. Myrtle's party is a very interesting scenario, in all of its forms. Myrtles apartment even shows how she is determined to live the upper class lifestyle. The description of the apartment ("a small living room, a small dining room, a small bedroom, and a bath.") Shows how poor it really is, and may also show how poor Myrtle is. The apartment also shows Myrtle's undying desperation and need to be seen as rich, mostly shown in the items inside the apartment. ...read more.

This shows the perseverance people at this time had to become rich, and how much they needed to force their particular medium on people to get a chance to become rich, but also to preserve their dreams. Tom, at this time, is at the party to escape his life with Daisy, and it is interesting how differently he treats Myrtle and Daisy, but also the similarities. Tom seems to be more willing to spend on Myrtle, for example, the apartment itself and the dog. It is obvious that Tom only wishes to use Myrtle, and thus the apartment, for s*x, which is why he has spent so little on it, as it only contains what he requires. However, there are similarities in how he treats Daisy and Myrtle. For example, he will not allow either of them to have their own says if they are not the same as his, and how brutally he treats them if they do not . We see this in plain view when he breaks Myrtle's nose. This shows how he believes in a patriarchal society, and shows how he can bring he back down to reality with one deft blow. Gatsby's party is so much different from Myrtle's it is unrecognizable. ...read more.

We can see contrasts between the two parties in many areas, such as the fact Myrtle's party feels very cramped, whereas Gatsby's is very open. This shows the value of life and wealth these two people have, as well as their ambitions. Myrtle's overwhelming ambition to be rich and famous controls as to what she does, which is to do anything she can and nothing else to get her dream. Gatsby's position in life means that he can do what with his life, making his party personify his freedoms. Overall, we are shown two different sides of 1920's America. We see the Hollywood-style America, with Gatsby's party, where everyone is having a fantastic time, even if it is all very hollow. But we are also seen the underbelly of America, with all the opportunists in one place trying to use the wealthiest person there to boost themselves upwards. This, could be said, to be the reality of the American Dream. To make it big, you need to use every chance you can get and make all of the risks you can chance to make it, and if you don't, you fall down the ladder and have to start again. ?? ?? ?? ?? Jareth Turner 12S ...read more.