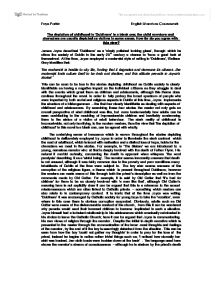 Depiction of childhood in 'Dubliners'

The depiction of childhood in 'Dubliners' is a bleak one; the child narrators and characters are usually depicted as victims in some sense. How far do you agree with this view? James Joyce described 'Dubliners' as a 'nicely polished looking glass', through which he offers the society of Dublin in the early 20th century a chance to 'have a good look at themselves'. At the time, Joyce employed a modernist style of writing in 'Dubliners', Wallace Gray identifies that: 'the modernist is hostile to city life, finding that it degrades and demeans its citizens...the modernist finds culture itself to be drab and shallow, and this attitude prevails in Joyce's stories' i This can be seen to be true in the stories depicting childhood as Dublin society is clearly identifiable as having a negative impact on the individual citizens as they struggle to deal with the events which greet them as children and adolescents, although this theme does continue throughout the novel. In order to fully portray the broad spectrum of people who were impacted by both social and religious aspects in Dublin at this time, Joyce implements the structure of a bildungsroman - the first four clearly identifiable as dealing with aspects of childhood and adolescence. By examining these four stories the reader not only gets an overall perspective of what childhood was like, but more fundamentally how adults can be seen contributing to the moulding of impressionable children and inevitably condemning them to the status of a victim of adult behaviour. The stark reality of childhood is inconceivable, not only horrifying, to the modern readers, thus the view that 'the depiction of childhood' in this novel is a bleak one, can be agreed with wholly. ...read more.

The old man they encounter clearly has sexually charged fantasies about children. His sadistic fantasies about 'how he would whip such a boy' and 'what he wanted was to get a nice warm whipping' are well outside the narrator's child-minded understanding. However, the boy clearly feels uncomfortable in the old man's presence and he says 'my heart was beating quickly with fear'. The disturbing presence of the 'queer old josser' echoes the indefinite relationship between Father Flynn and the narrator of 'The Sisters', yet the 'encounter' here clearly shows the man exploiting and abusing the innocence of youth. Such matters in contemporary times are viewed as truly horrifying yet this is a theme present in Joyce's other stories - something which truly haunts readers through the presentation of the situation and the language used to describe it, 'his voice...seemed to plead with me that I should understand him'. Joyce here is indicating how the filthy corruption of Dublin spills over onto children. Although a sense of hope can be indentified in the boy's finding of a bond of friendship with Mahony, the underpinning semblance is that although the boys may be able to escape their day to day normalities, it is impossible for them to escape their bleak life - and inevitably future - whilst they are captives of the city of Dublin. The story of 'Araby', as with 'An Encounter', deals with the longing for adventure and escape, although here this longing finds a focus in the object of the narrator's desire. Joyce may have drawn inspiration for this story from his own adolescent experience. At the age of fourteen Joyce had his first sexual experience with a prostitute, it was at this stage that he had to choose between sex and religion and it is perhaps his own longing for change and escape. ...read more.

The first three tales of childhood which Joyce presents us with are riddled with uncertainty and the realisation of a bleak and unpromising future - these emotions are eventually epitomised in 'Eveline' as contributing to the mental paralysis which later stories in Dubliners identify in other characters. Terrence Brown states that: 'This text...contains autobiographical matter and is rooted in an intensely accurate apprehension of the detail of the Dublin life Joyce had observed...as he grew to adulthood' ii Thus it is obvious that the stories portraying childhood are not simply the creation of Joyce, but rather the reality which children were subject to, strengthening the reader's ability to identify the true bleakness of the situations. Childhood has been depicted as a hardship rather than a joy, which is difficult for contemporary readers to understand without looking at the context in which these stories are written. With poverty rife and religion having a strong hold on how a child's impression of the world was shaped, a child's life in early 20th century Dublin was never going to be wholly enjoyable. Although the children search for ways of escapism these prove ineffectual as the corruption of Dublin refuses to allow them such opportunity - often as a result of the action of adults. Fundamentally, Joyce here argues that children are victims of the city they are a part of and their bleak existence cannot be overcome. By having examined the evidence which Joyce presents us with regarding childhood and its depiction then it can be confirmed that the view can be agreed with wholly. Word Count: 2,564 (excluding quotations) i Wallace Gray, An Introduction to 'Dubliners' ii Terrence Brown, Introduction and Notes on 'Dubliners' ?? ?? ?? ?? Faye Parkin English Literature Coursework ...read more.