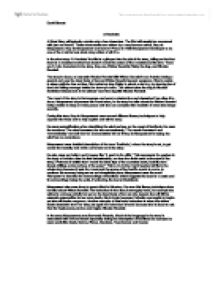 A Vendetta A Short Story will typically contain only a few characters. The Plot will usually be concerned with just one theme. These short stories are written by a very famous author, Guy de Maupassant. Guy de Maupassant was born in France in 1850.Maupassant developed to be one of the most famous short story writers of all time. In the short story 'A Vendetta' the title is a glimpse into the plot of the story, telling us that that there is a vendetta involved but doesn't reveal the nature of the vendetta and its aims. There are 3 main characters in the story, they are, Widow Saverini, Frisky the dog, and Nicolas Ravolati. ...read more.

During this story Guy de Maupassant uses several different literary techniques to help express his views and to help explain and tell the story. He uses personification when describing the wind and sea on the coast of Bonifacio. He uses the sentence "The wind harasses the sea remorselessly." The words 'harasses' and 'remorselessly' are both human characteristics it is as if Guy de Maupassant is saying the wind has no conscience. Maupassant uses detailed description of the town 'Bonifacio', where the story is set, to get across the brutality and evil to come later on in the story. He also uses symbolism and imagery like "A gash in the cliffs," This represents the gashes in the body of Antoine after the first assassination, ...read more.

He uses this literary technique when he talks about Widow Saverini. Her behaviour in the story is strangely ironic, for example the widow is a strong catholic but yet on the dead body of her son she swears she will kill the assassin responsible for her sons death, this is ironic because Catholics are taught to forgive yet she still seeks vengance. Another example of this ironic behaviour is when the widow seeks absolution from her sins; yet again her behaviour is ironic because she is about to ask God for forgiveness yet she cant forgive Nicolas Ravolati. In the story Maupassant uses Semantic Prosody. Much of the language in the story is associated with evil and death especially during the description of Bonifacio for example he uses words like Gash, Barren, Pierce, Desolate, Treacherous and Coarse David Sinnott ...read more.