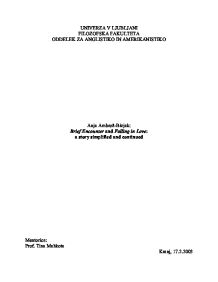 Brief Encounter and Falling in Love - a story simplified and continued.

UNIVERZA V LJUBLJANI FILOZOFSKA FAKULTETA ODDELEK ZA ANGLISTIKO IN AMERIKANISTIKO Anja Ambro�-Bizjak: Brief Encounter and Falling in Love: a story simplified and continued Mentorica: Prof. Tina Mahkota Kranj, 17.2.2003 Discussing David Lean's Brief Encounter (1945) is often conclusive to mentioning its remakes: Brief Encounter produced by Carlo Ponti in 1973 and the 1984 version Falling in Love directed by Ulu Grosbard. All three are beautiful, perhaps even text-book examples, of how a film or a story can develop through time, different cultural approaches, of how different aspects of a certain story are brought into focus at different times by different people, how different techniques are used, and ultimately, why one decides to make a remake rather than an 'original' film. To show that a remake is not merely a copy but that it is an original piece of work, I am only going to focus on the original Lean's Brief Encounter and on the last version Falling in Love. Moreover, the comparison of the two will show that the remake is largely culturally influenced and that the story itself may be changed to a great extent. First of all, the most apparent reason why remakes happen is economic - a remake as a 'presold' property. ...read more.

Moreover, another proof of how the way things are presented gives meaning to the film is the remake Falling in Love. A similar story line in Falling in Love is presented in a linear way, with no inner monologues - everything that is felt by the characters is said to their friends or not shown at all. The result of this is that the main characters in Falling in Love, Margaret Gilmore (Molly) played by Meryl Streep and Frank Raftis played by Robert De Niro, appear to be passive, indecisive and less 'real'. It is as though they are two people being involved in a love affair by a coincidence. And indeed, in this film coincidences are its weakest point. There are simply too many of them, Throughout the opening of the film the two main characters appear in the same locations (the train, public telephones at the station, the shopping centre, the book shop) but do not run into each other and do not know each other. Furthermore, they do not even notice each other until they bump into each other at the bookshop and by accident take each other's books instead of theirs. Later on they see each other again on a train a few months later. ...read more.

Obviously, the two versions differ in many ways and in my opinion Falling in Love is a simplified version of Brief Encounter with certain changes that are culturally as well as historically based. It is logical that the situations as well as trains and the stations in Falling in Love are different since the setting was the eighties in the USA and also there is no stress on social class since this could not be an issue in the American film of that time. And perhaps this is a remake, which meant to be entirely different from the original, as far as the plotline, character portrayal and technique are concerned, for it has a different title as well. And looking at it from that point of view, we can see that the films and the titles bear an important meaning: in Brief Encounter the story is actually only about an encounter which was brief and so was the affair which ended as fast as an encounter. But in Falling in Love we see the process of two people gradually developing feelings for each other and in a way we can see the denoument, in a way a positive continuation of Lean's story, which was sad and dark. Falling in Love, however, is a happy, sunny fairy-tale with a happy end. ...read more.