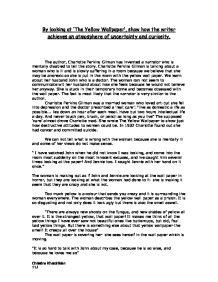 By looking at 'The Yellow Wallpaper', show how the writer achieves an atmosphere of uncertainty and curiosity.

By looking at 'The Yellow Wallpaper', show how the writer achieves an atmosphere of uncertainty and curiosity. The author, Charlotte Perkins Gilman has invented a narrator who is mentally disabled to tell the story. Charlotte Perkins Gilman is talking about a woman who is ill and is slowly suffering in a room because we believe that she may be anorexic so she is put in the room with the yellow wall paper. We learn about her husband John who is a doctor. The woman can not seem to communicate wit her husband about how she feels because he would not believe her anyway. She is stuck in their temporary home and becomes obsessed with the wall paper. The fact is most likely that the narrator is very similar to the author. Charlotte Perkins Gilman was a married woman who loved art-but she fell into depression and the doctor prescribed a 'rest cure': "live as domestic a life as possible... ...read more.

It creeps all over the house" The wall paper is covering her- she sees herself in the wall paper which is moving. "It is so hard to talk with John about my case, because he is so wise, and because he loves me so" The woman can not communicate with him because she thinks that he can not communicate with her. The woman talks about the baby. "There is one comfort-the baby is happy and well and does not have to occupy this nursery with the horrid wallpaper." The narrator is foreshadowing the wall paper like it looks like its committing suicide and hints that she is going to committee suicide in the end. "When you follow the lame uncertain curves for a little distance they suddenly committee suicide-plunge off at outrageous angles, destroy themselves in unheard of contradictions." The woman tries to move the bed to the window so she can hang herself in the window but can not to this because it is nailed down. ...read more.

The story is also very confusing near to the end when the woman has a rope, so when the woman behind the wall tries to escape, she can tie it to her. She has also "escaped", and when her husband John saw her, he fainted. "I've got out at last," said I, "in spite of you and Jane. And I've pulled off most of the paper, so you can't put me back! Now why should that man have fainted? But he did, and right across my path by the wall, so that I had to creep over him every time!" The woman is describing herself like the woman in the yellow wall paper which makes it seem odd. It also doesn't tell us exactly what happened to the woman, but I believe she has committed suicide by attaching the rope to herself. "If that woman does get out, and tries to get away, I can tie her!" Overall, the story is strange and shows curiosity and uncertainty. The woman once hated to be stuck in the yellow wall paper, now loved to be in that room. Christina Khatchikian 11J ...read more.