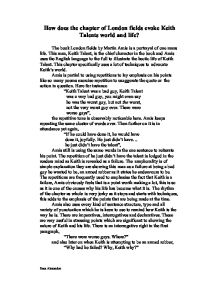 How does the chapter of Londonfields evoke Keith Talents world and life?

How does the chapter of London fields evoke Keith Talents world and life? The book London fields by Martin Amis is a portrayal of one mans life. This man, Keith Talent, is the chief character in the book and Amis uses the English language to the full to illustrate the hectic life of Keith Talent. This chapter specifically uses a lot of techniques to advocate Keith's world. Amis is partial to using repetitions to lay emphasis on his points like so many poems exercise repetition to exaggerate the quote or the action in question. Here for instance "Keith Talent was a bad guy, Keith Talent was a very bad guy, you might even say he was the worst guy, but not the worst, not the very worst guy ever. There were worse guys", the repetitive tone is observably noticeable here. Amis keeps repeating the same cluster of words over. Then further on it is in attendance yet again, "If he could have done it, he would have done it, joyfully. ...read more.

There are imperatives, interrogatives and declaratives. These are very useful in stressing points which are significant to showing the nature of Keith and his life. There is an interrogative right in the first paragraph, "There were worse guys. Where?" and also later on when Keith is attempting to be an armed robber, "Why had he failed? Why, Keith why?" This is a greatly emphasised point on how much of a failure Keith was. These interrogatives are used in surplus to generate the sense of the failure of Keith's life. Martin Amis also uses quite a lot of declaratives, and he uses them in such a way that it screams with emphasis. This is evident here, "The man had ambition." This is so very plain and clear; a bare statement with a great deal of emphasis on the point in that the man had drive and aspiration. As well as earlier on in this chapter when it says, "He took up racketeering." This is just as plain and simple as before, there is not much point bar the emphasis on the fact that he took up racketeering. ...read more.

Amis keeps jumping between types of sentences all the time, principally at the start and because of this it is hard to pin down the sentence. Amis first describes Keith's character when it says 'bad guy', then he uses an interrogative almost instantly after when it says 'where?' One of the most effective techniques that Amis uses to create emphasis is the use of syntax. When Amis writes " example = wish on those eyes...p.1 " This shows an endeavour to fashion an emphasis here as he could leave the sentence a great deal simpler but as he has transformed the word order it affixes an effective emphasis to it. Overall the effectiveness of this chapter of London Fields by Martin Amis is greatly achieved with all the techniques that are present that evoke this man Keith Talents life and character. The reader gets a real impression of this mans life and starts to appreciate the events that Keith is implicated in and commences to understand the reasons for his actions. Ross Alexander ...read more.