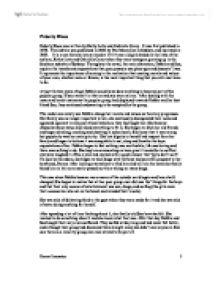 Puberty Blues is a non-fictional story based on the lives of the authors, Kathy Lette and Gabrielle Carey as they were teenage

Puberty Blues Puberty Blues was written by Kathy Lette and Gabrielle Carey. It was first published in 1979. This edition was published in 2002 by Pan Macmillan in Sydney; and reprinted in 2003. It is a non-fictional story aimed at 13-14 year old girls based on the lives of the authors, Kathy Lette and Gabrielle Carey when they were teenagers growing up in the Southern suburbs of Sydney. Throughout the novel, the main characters, Debbie and Sue, explore the treacherous expectations that peer pressure can place upon adolescents' lives. It represents the importance of coming to the realization that creating morals and values of your own, whether male or female, is the most important thing that you will ever have to do. At just thirteen years of age Debbie would have done anything to become part of the popular group. If you weren't in that crowd you were no one. After dealing with the mean and harsh treatments the popular group had displayed towards Debbie and her best friend Sue, they continued endeavoring to be accepted by the group. ...read more.

This was when Debbie became more aware of the outside world again and how she'd changed. She began to realize that all her peer group ever did was 'do' things for the boys and that their only source of entertainment was sex, drugs, and surfing (the girls were their accessories who sat on the beach and minded their towels). She was sick of delivering food to the guys when they were ready for it and she was sick of never doing anything for herself. After spending a lot of time thinking about it, she finally told Sue how she felt. She wanted to do something about it and she knew what that was. After that day Debbie and Sue bought their very own surfboard. They surfed all day long and had never felt better, and although their group had disowned them straight away she didn't care anymore. She saw them as a minority group she once strived to be part of. Puberty Blues is written in first person. This displays a more personal connection between the character and the reader. ...read more.

popularity. Because the author includes the main characters throughout the novel, and shows their changes and how they grow as people, the use of an epilogue is one of the most important parts of this novel. It shows some who die from drug overdose and others ending up in jail for crimes they have committed. It shows how important it is to make the right decisions without sounding "lame" to the intended audience. The paragraph which reflects the most change in Debbie is the last paragraph in the book (p.113). "We climbed the sand hill at Wanda and looked back. There they were, a mass of black specks way out to sea. The surf had dropped. They sat astride their boards in the grey, flat water; waiting. I knew they'd be talking about their chicks. They always did, way out there when the waves weren't working. 'Hey Deb, let's go get a milkshake' Sue and I walked off". It shows that Debbie at last sees the boys as an overrated obsession. How they're better off claiming independence rather then living up to other people's expectations and it also shows that your true friends are the ones who will always be there. 1 Emma Lancaster ...read more.