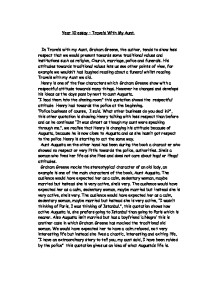 Travels With My Aunt.

Year 10 essay - Travels With My Aunt. In Travels with my Aunt, Graham Greene, the author, tends to show less respect that we would present towards some traditional values and institutions such as religion, Church, marriage, police and funerals. His attitudes towards traditional values lets us see other points of view, for example we wouldn't had laughed reading about a funeral whilst reading Travels with my Aunt we did. Henry is one of the few characters which Graham Greene show with a respectful attitude towards many things. However he changes and develops his ideas as the days pass by next to aunt Augusta. "I lead them into the dinning room" this quotation shows the respectful attitude Henry had towards the police at the beginning. "Police business of course, I said. What other business do you deal in?", this other quotation is showing Henry talking with less respect than before and as he continues "It was almost as though my aunt were speaking through me.", we realise that Henry is changing his attitude because of Augusta, because he is now close to Augusta and as she hasn't got respect to the police Henry is starting to act the same way. ...read more.

We would have expected her to have a calm relaxed, not very interesting life but instead she lives a chaotic, interesting and exiting life, "I have an extraordinary story to tell you, my aunt said, I have been raided by the police" this quotation gives us an idea of what Augusta's life is. Graham Greene mocks religion when he writes about Mr. Viscounti disguising himself as a priest. This story creates humour as it is a false priest who is very interested in the sexual relations of a girl who was confessing, this creates humour as we wouldn't have expected priests to talk or to be interested in the confessant's sexual relations. Another occasion were Graham Greene mocks religion is when he writes about the Humanist's funeral, which was a premature cremation. Graham Greene has written a funny event coming out from a sad occasion, also it made it seem even funnier because the story of the Humanist's funeral was told on another funeral. Also religion is mocked when Graham Greene writes about a church for dogs ran by Curran, an eccentric man, this suggests that that church is not going to be serious or respectful. ...read more.

This quotations show how Henry at first was shocked by the fact that his aunt's boyfriend had drugs also from the quotation we find out that Augusta from the start didn't mind about drugs. "People who talk about there being no harm in pot" "Is there?" in this other quote we can appreciate the change in Henry's mentality, he shows indifference towards drugs. Aunt Augusta is not a stereotypical old woman, we wouldn't expect woman of her age talking freely about sex whilst Augusta is not shy and so talks freely and happily about sex, this quotation proves it: "I am all for a little professional sex". Also Graham Greene mocks daily life style and behaviours, an example is again aunt Augusta, she's very attracted to men whilst an stereotypical woman of her age wouldn't. "I let them in, though, because they were polite and one of them, the one in uniform, was tall and good-looking ". This quotation proves that Augusta is very attracted to men. In conclusion, Graham Greene writes about daily life things but though another point of view, he stands out the curious, special, rare things that could happen in the most common occasions. Also Graham Greene mocks several pillars of respectability such as religion, law and traditional morality. ...read more.