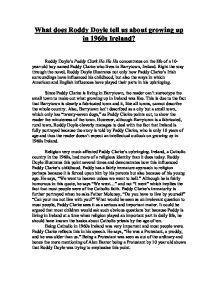 What does Roddy Doyle tell us about growing up in 1960s Ireland?

What does Roddy Doyle tell us about growing up in 1960s Ireland? Roddy Doyle's Paddy Clark Ha Ha Ha concentrates on the life of a 10-year-old boy named Paddy Clarke who lives in Barrytown, Ireland. Right the way through the novel, Roddy Doyle illustrates not only how Paddy Clarke's Irish surroundings have influenced his childhood, but also the ways in which American and English influences have played their parts in his upbringing. Since Paddy Clarke is living in Barrytown, the reader can't stereotype the small town to make out what growing up in Ireland was like. This is due to the fact that Barrytown is clearly a fabricated town and it, like all towns, cannot describe the whole country. Also, Barrytown isn't described as a city but a small town, which only has "twenty-seven dogs," as Paddy Clarke points out, to show the reader the minuteness of the town. However, although Barrytown is a fabricated, rural town, Roddy Doyle cleverly manages to deal with the fact that Ireland is fully portrayed because the story is told by Paddy Clarke, who is only 10 years of age and thus the reader doesn't expect an intellectual outlook on growing up in 1960s Ireland. ...read more.

Paddy doesn't see the importance of the event and enjoys the event because it is something different to what they do everyday in school. He says, "Miss Watkins started clapping, so we did as well. We started laughing. She stared at us and we stopped but we kept clapping." Hence, Paddy is clapping because his teacher does and does not see the significance of the event like his teacher does but rather finds the event quite amusing. . This strong feeling of patriotism was clearly an important part of growing up because it was taught to children and the teacher is very strict about it and punishes Paddy for making a joke out of it. Paddy says, "She gave me three on each hand". In 1960s Ireland, children were also influenced by American culture. Roddy Doyle suggests that music was one of the American influences. Paddy's father listens to a singer called Hank Williams and Paddy takes pleasure in listening to these songs. He says, "I liked the next bit though. - THEN I JUMPED INTO THE RIVER..." In addition to music, American figures were considered childhood heroes in Ireland. An example of this is the Native American Geronimo. "He was the last of renegade Apaches. ...read more.

Sometimes, he was just being mean. I won a medal. I came second in the hundred yards except it wasn't nearly a hundred yards; it wasn't even fifty." Many differences in language can be seen in the novel. For example, the word that is used to describe a misbehaving child is the word "messer". This is not an English word and a 1960s Irish colloquial word. Gaelic also influenced the Irish language but it was not commonly understood and spoken by 1960s schoolchildren. The analysis of Roddy Doyle's Paddy Clarke Ha Ha Ha points to the conclusion that Roddy Doyle informs the reader of many aspects of growing up in 1960s Ireland to include the cultural, religious and historical aspects; in addition to the numerous influences shaping the lives of those growing up in 1960s such as American and English influences. Moreover, the Irish and non-Irish influences on Paddy suggest that it was rather confusing to grow up in 1960s Ireland. The reason for this, as Roddy Doyle suggests, is that in the 1960s, many external influences were coming into Ireland and thus the Irish culture was developing rapidly and children such as Paddy Clarke were growing up in a time where these cultures met and thus were between the two cultures. ?? ?? ?? ?? ...read more.