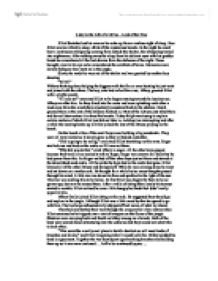 A day in the Life of a littl'un - Lord of the Flies Elliot Stretched out his arms as he woke up from a restless night of sleep. Poor Elliot was too afraid to sleep, afraid of the mysterious beastie. In the night he could hear a continuous whispering coming from outside the shelter, the whispering turned into nightmares. After rubbing away the sleep from his delicate eyes with his grubby hands he remembered all the bad dreams from the darkness of the night. These brought a tear to his eye as he remembered the comforts of home. Memories were slowly fading as time went on in the jungle. Slowly he made his way out of the shelter and was greeted by another boy shouting "El! ...read more.

On the beach a few of the small boys were building a big sandcastle. They were all very excited as it slowly grew as they all helped eachother. "This is going to be so big," exclaimed Elliot stretching out his arms. Roger strolled over and trod on the castle as if it was not there. "Why did you do that," cried Mikey in anger. All the other boys gasped because they were all too scared to talk to Roger. Roger was renown as a bully but he had power from this. As Roger walked off the other boys just sat there and starred at the demolished sand castle. All the pride the boys had in the castle had gone. ...read more.

The two boys enthusiastically skipped off not aware of what lay ahead. They had only battled their way through the creepers for a few metres when Elliot screamed as he tripped over a mat of creepers on the floors of the jungle. Shadows were swaying back and fourth as Mikey swung on a branch. Both of the boys were scared about adventuring into the unknown but they would not admit this to each other. "This would be a really cool place to build a den but we will need loads of branches and leaves," said Elliot imagining what it would look like. Mikey nodded his head in agreement. Together the two boys spent ages breaking branches and building them up so it was more enclosed.... Left to be continued by you.... ...read more.

This student written piece of work is one of many that can be found in our AS and A Level George Eliot section.

Related AS and A Level George Eliot essays