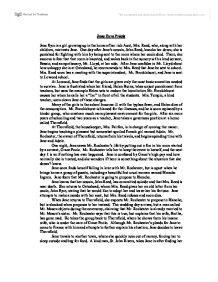 Jane Eyre Pr�cis Jane Eyre is a girl growing up in the home of her rich Aunt, Mrs. Reed, who, along with her children, mistreats Jane. One day after Jane's cousin, John Reed, knocks her down, she is punished for fighting with him by being sent to the room where her uncle died. There, she swoons in fear that that room is haunted, and wakes back in the nursery with a kind servant, Bessie, and an apothecary, Mr. Lloyd, at her side. After Jane confides in Mr. Lloyd about how unhappy she is at Gateshead, he recommends to Mrs. Reed that Jane be sent to school. Mrs. Reed soon has a meeting with the superintendent, Mr. Brocklehurst, and Jane is sent to Lowood school. At Lowood, Jane finds that the girls are given only the most basic amenities needed to survive. Jane is frustrated when her friend, Helen Burns, takes unjust punishment from teachers, but uses the example Helen sets to endure the humiliation Mr. ...read more.

Jane soon finds herself falling in love with Mr. Rochester, but is upset when he brings home a group of guests, including a beautiful but cruel woman named Blanche Ingram. Jane fears that Mr. Rochester is going to propose to Blanche. Jane learns that her cousin, John Reed, has committed suicide and that Mrs. Reed is near death. She returns to Gateshead, where Mrs. Reed gives her an old letter from her uncle, John Eyre, stating that he would like to adopt her and leave her his fortune. Jane attempts to make amends with her aunt, but Mrs. Reed refuses and soon dies. When Jane returns to Thornfield, she expects Mr. Rochester to propose to Blanche, but is shocked when proposes to her instead. The wedding day arrives, but a man called Mr. Mason objects during the ceremony, claiming that Mr. Rochester is already married to Mr. Mason's sister. Mr. Rochester says that this is true, but explains that his wife, Bertha, has gone mad. ...read more.

He asks Jane to marry him and join him in India, but while Jane agrees to go to India, she refuses to marry him. St. John continues to push for the marriage, and Jane almost gives in, until one night she thinks she hears Mr. Rochester's voice calling her and decides she must go back to Thornfield. Upon her arrival at Thornfield, Jane finds that it has been destroyed in a fire started by Bertha. Mr. Rochester saved his servants, but was unable to save Bertha. He was also blinded and lost a hand in the fire. Jane goes to Ferndean, where Mr. Rochester is now living with two elderly servants. Mr. Rochester tells Jane of how he called out for her in the night, but Jane does not tell him about the voice she thought she heard. Jane stays with Mr. Rochester, and they soon marry. Ten years after the marriage, Jane tells of how content she is with Mr. Rochester. He began to regain his sight two years after their marriage, and was able to see their first born child, a boy. St. John sent a letter saying he is expecting to die soon, but Jane does not feel badly for him. ...read more.