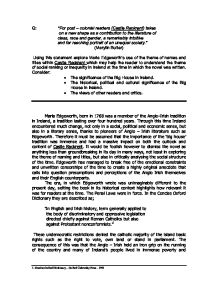 Explore Maria Edgeworth's use of the theme of names and titles within Castle Rackrent which may help the reader to understand the theme of social ranking or inequality in Ireland at the time in which the novel was written.

Q: "For post - colonial readers (Castle Rackrent) takes on a new shape as a contribution to the literature of class, race and gender, a remarkably intuitive and far reaching portrait of an unequal society." (Marylin Butler) Using this statement explore Maria Edgeworth's use of the theme of names and titles within Castle Rackrent which may help the reader to understand the theme of social ranking or inequality in Ireland at the time in which the novel was written. Consider: * The significance of the Big House in Ireland. * The historical, political and cultural significance of the Big House in Ireland. * The views of other readers and critics. Maria Edgeworth, born in 1768 was a member of the Anglo-Irish tradition in Ireland, a tradition lasting over four hundred years. Through this time Ireland encountered much change, not only in a social, political and economic sense, but also in a literary sense, thanks to pioneers of Anglo - Irish literature such as Edgeworth. Therefore it must be assumed that the importance of the 'big house' tradition was immense and had a massive impact on both the outlook and content of Castle Rackrent. It would be foolish however to dismiss the novel as anything less than groundbreaking in its day in many ways, not least in exploring the theme of naming and titles, but also in critically analysing the social structure of the time. Edgeworth has managed to break free of the emotional constraints and unwritten censorships of the time to create a highly original anecdote that calls into question presumptions and perceptions of the Anglo Irish themselves and their English counterparts. The era, in which Edgeworth wrote was unimaginably different to the present day, setting the book in its historical context highlights how relevant it was for readers at the time. The Penal Laws were in force. In the Concise Oxford Dictionary they are described as; 'In English and Irish history, term generally applied to the body of discriminatory and oppressive legislation ...read more.

Other characters in the novel have titles or names that reflect their nature or situation, For example Captain Monegawl. Obviously the title captain carries with it an air of authority while the use of the word 'money' is significant in his surname as it indicates a family of great wealth. This is supported by Sir Condy's marriage to Miss Isabella: "There's no compare between our poor Judy and Miss Isabella, who has a great fortune they say."15 Lady Skinflint is another character whose characteristics match her name. Thady constantly criticises her for being parsimonious in nature, a 'skinflint'. "She was from the family of the Skinflints... but I always suspected she had scotch blood in her veins."16 The reference to 'Scotch blood' within the Irish idiom represents meanness. I think this was an attempt by Edgeworth to highlight the amount of prejudice and social baggage that could be contained in a name, and to convey the potential danger of holding those prejudices by parodying what was probably happening in real life also at the time. Through this naming technique Edgeworth adds character, comedy and morality to her novel in which the reader must evaluate the significance of naming in both a historical and post - colonial sense. I think a very important aspect of Castle Rackrent is the fact that many characters, or suggested characters in the novel are not given names. These are mostly people from the lower classes of 19th century Irish society, those on the margins. These include the Irish peasantry and the wives of all the Rackrents apart from Sir Condy's and surprisingly the middle man hired by Sir Kit while he was in England. The Irish peasantry in particular (with the exception of Jason and Thady) are given marginal roles if any in the novel. Most noticeable is the fact that they are also regarded as a singular entity, not worthy of individualism. ...read more.

Any one of these men can be seen as the 'Buffoon'. This is representative to Edgeworth of a general complacency creeping in among the upper classes. All of these men have a worrying apathy towards their Irish tenants; something which seemed to cause much concern to Edgeworth and was probably a central motive in writing the novel. Thady himself is a stock character with the inner conflict he suffers between his own native Irish and the Rackrent family to whom he claims undying loyalty. This is representative of the Irish people as a whole at the time when Edgeworth wrote, in the struggle that they found themselves in when attempting to balance the burden of penal laws, failing crops, starvation and eviction by middle men. This explains Thady's reluctance to name the Middleman in Castle Rackrent; he is a threat to the existence of many of the Irish tenants, and with no formal title or acknowledgement he seems less formidable and less important. This explains to the reader the importance that a name or title brings to one's authority The fact is that Edgeworth most likely did not want her audience to focus on the individual characters of her novel, but rather on the flaws each of them has. With the exception of Sir Condy, the individuals in Castle Rackrent should be looked on as caricatures rather than characters. Though this the reader begins to empathise with Edgeworth in relation to the society in which she lived, something that she further enriched with the powerful tool of naming in her novel. Maria Edgeworth, through the use of puns ('Rackrent', 'Skinflint' etc), use of titles such as 'Sir' and even in her lack of naming, i.e. towards the Irish peasantry and Women in the novel, provides the post-colonialist reader with a more meaningful understanding of the social, political and economic conditions in 19th century Ireland. In Castle Rackrent Edgeworth has redesigned a classical literary device to create a memorable anecdote for the modern age and therefore immortalising her representation of the society of Ireland during her lifetime. ...read more.