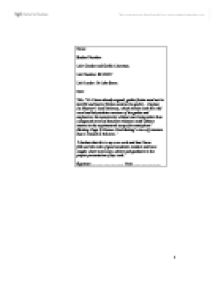 The theme of the Gothic in Rebecca

The narrator develops a morbid fascination with Rebecca, she is curious to know and be more like her predecessor as she believes that would help Maxim to love her. This fascination is portrayed through her horrified yet still inquisitive reaction to Mrs Danvers showing her Rebecca's bedroom; 'I was aware of a growing sense of horror, of horror turning into despair. I touched the quilt on the bed, traced with my fingers the monogram on the nightdress case, R de W, interwoven and interlaced... The nightdress was inside the case, thin as gossamer, apricot in colour. I touched it, drew it out from the case, put it against my face.' (Page 187. Rebecca). The narrator's desire to become Rebecca is reiterated through her yearning of ownership of Rebecca's possessions; 'That exquisite mantelpiece, the ceiling, the carved bedstead, and the curtain hangings, even the clock on the wall and the candlesticks up on the dressing table beside me, all were things I would have loved and worshipped had they been mine.'(Rebecca. Page 187) The nameless narrators jealousy unwinds itself into the unmasking of the actual joining of the two heroines. The creation of the gothic Jekyll and Hyde character could be representational of the dark feared highly sexed side of a woman 'In a minute Rebecca herself would come back into the room, sit down before the looking-glass ... I should see her reflection in the glass and she would see me too... ...read more.

(Horner & Zlosnik, Page 111)Allan Lloyd Smith expresses that 'Freud's analysis of the uncanny offers the insight that this effect depends upon a consonance between inner and outer, conscious and unconscious, spoken and unspoken elements. It is precisely because something is not admitted that reference to it produces an effect of uncanniness. In a sense it matters less what the unspoken material is than that it be unspoken, unspeakable.' (The Phantoms of Drood and Rebecca. Page 306) Rebecca represents the uncanny as she is something that is in the mind of all of the characters and is not easily eradicated, except through repression and denial, however like her hand writing surfacing, she too constantly re-surfaces throughout the text. As is suggested by Harriet Hawkins 'their counter images seem photo-negative reversals of each other, or two sides of one coin' (Horner & Zlonsik, Page 108) The burning of Manderley at the end of the text appears to surmise the whole presence that Rebecca creates, especially her presence on the narrator. Wheatley suggests that '...on one hand it exorcise the ghost of Rebecca, but on the other hand it emphasises that the heroine will never possess Manderley or take the place of Rebecca.' (Wheatley, Page 134). Therefore insinuating that it is only through the burning destruction of Manderley, in an almost funeral pyre like way that Rebecca can be destroyed. Overall, it can be seen that Rebecca's presence is most felt through her handwriting and this writing, as suggested by Horner 'uncannily inscribes the body's presence despite its absence through death.' (Horner & Zlonsik, Page 110). ...read more.