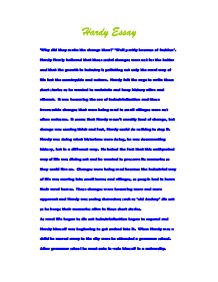 Hardy Essay 'Why did they make the change then?' 'Well partly because of fashion'. Hardy firmly believed that these social changes were not for the better and that the growth in industry is polluting not only the rural way of life but the countryside and nature. Hardy felt the urge to write these short stories as he wanted to maintain and keep history alive and vibrant. It was becoming the era of industrialisation and these irrevocable changes that were being mad to small villages were not often welcome. It seems that Hardy wasn't exactly fond of change, but change was coming thick and fast, Hardy could do nothing to stop it. Hardy was doing what historians were doing, he was documenting history, but in a different way. He hated the fact that this antiquated way of life was dieing out and he wanted to preserve its memories so they could live on. Changes were being mad because the industrial way of life was moving into small towns and villages, so people had to leave their rural homes. ...read more.

Hardy left the village as a young boy but returns as the prodigal 'Mr Lackland'. Hardy includes himself in all of his stories referring to himself as Mr Lackland or the home-comer and various others. Mr Lackland comes from the fact that he is literally lacking in land and rural experience. Something is different with Hardy when he comes home, the local people don't see him in the same light as they used too. He gets called 'sir' a lot by the people of the community as he is a well educated man; education is what sets us apart from others, it determines our social status. There was a huge Diaspora in the industrial age as people were moving out of small villages and town into the big cities. People were give the opportunity to go out in search for new work, possibly work that was more exciting, something different from what they were used too, the new era. Hardy writes these short stories using a lot of colloquialisms 't'was 'em' As he wants to give a more 3-d effect to his stories, he wants to write the stories as they were told. ...read more.

Women were cheaper too employ than men, they were not really seen as equals and when they thought they were gaining independence, but in reality they weren't at all. There were 2 different types of social class then, lower- class and upper-class, and it was seen as ok for the upper-class to treat the poor badly. You were upper-class if your parents were, you inherited your money and inherited money was seen as a lot better than earned money as it was in your family for generations. When old Andrey was thrown out by old Mrs Hardcome he was let again by young Mrs Hardcome. This shows the two different generations had different attitudes to the poor and shows part of the change in society. Young Mrs Hardcome's father was probably a factory owner with earned money while old Mrs Hardcome had inherited money. This shows us when middle class was beginning to evolve, young Mrs Hardcome was one of the earliest middle class citizens. From writers like Hardy we can vividly imagine how people in his day lived. He creates a clear picture and understanding of his time and does well in preserving life before industrial revolution. By Conor Magee 11 c ...read more.