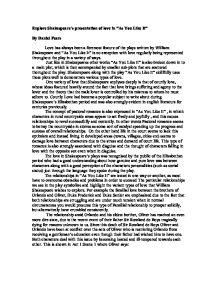 Explore Shakespeare's presentation of love in "As You Like It" By Daniel Pears Love has always been a foremost feature of the plays written by William Shakespeare and "As You Like It" is no exception with love regularly being represented throughout the play in a variety of ways. Just like in Shakespeares other works "As You Like It" is also broken down in to a main plot, which is then accompanied by smaller sub-plots that are scattered thorughout the play. Shakerspeare along with the play "As You Like It" skillfully uses these plots well to demonstrate various types of love. One variety of love that Shakespeare anylyses deeply is that of courtly love, whose ideas featured heavily around the fact that love brings suffering and agony to the lover and the theory that the male lover is controlled by his mistress to whom he must adhere to. Courtly Love had become a popular subject to write about during Shakespeare's Elizabethan period and was also strongly evident in english literature for centuries previously. The concept of pastoral romance is also expressed in "As You Like It" , in which characters in rural countryside areas appear to act freely and joyfully , and this causes relationships to revel successfully and contently. In other words Pastoral romance seems to betray the countryside in stories as some sort of catalyst speeding up the progress and success of overall relationships. ...read more.

bequeathing to his banished brother, And all their lands restored to them again That were with him exiled" This act of love shown by Duke Frederick towards Duke Senior and his company could also be due to the powers the countryside possesses through pastoral romance. This could be explained by the way that Duke Frederick has a dramatic change of heart when entering the forest and he also wants to be "freed" from court life by deciding to join a monastery. A prominent relationship on display in "As You Like" is between the inseparable cousins that are Rosalind and Celia. This relationship is under strain mainly just because of the complications surrounding their father's relationship. They have been brought in to the thick of their father's own personal conflict due to Duke Frederick's antics, referring to him wanting to exile Rosalind and consequently separate Rosalind and Celia. Rosalind and Celia respond to the antics of their fathers positively, by promising to each other that they'll stand by each other religiously through the hard times that are facing them, causing them both to flee from the court together. This united type behavior form the cousins shows the audience that this love is extremely solid and their love for each other is cannot be doubted. This is shown when Celia responds to her fathers actions by saying to Rosalind in Act 1 Scene 3: "Prithee, be cheerful. ...read more.

This is correct, as Phoebe is falling for Rosalind in disguise, without being informed. The relationship between these two characters is a clear example of the courtly love evident in "As You Like It", because of the agony and frustration, which Pheobe endures due to her love Ganymede. Ganymede reacts to Phoebe;s attempts to win her heart by saying in Act 3 Scene 5: "I pray you, do not fall in love with me, For I am falser than vows made in wine." This dismissal of Phoebe's love on Ganymede's part shows that Ganymede has no interest in Phoebe at all, but despite this in true courtly love fashion Phoebe's decides to persist with her quest to win Ganymede's heart. In the end their relationship disintergrates when Phoebe says in Act 5 Scene 4: "If sight and shape be true, Why then, my love adieu." The most influential relationship in the whole of the play is beyond doubt that of between Rosalind and Orlando. This is true, as this relationship seems to dictate the course of the storyline. This relationship falls down heavily in to the elements of stereotypical pastoral romantic stories. This is correct, as Orlando seems to endure a lot of agony and pain over the course of the play..........................I will finish this later In conclusion I believe Shakespeare has shown us that men actually behave in the same way as women when in love. The evidence ot prove this is the behaviour of most characters in the play. Most of these characters endure large amounts of suffering ...read more.