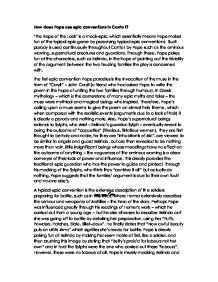 Epic convention - r**e of the Lock

How does Pope use epic conventions in Canto I? 'The r**e of the Lock' is a mock-epic, which essentially means Pope makes fun of the typical epic genre by parodying typical epic conventions. Such parody is used continuously throughout Canto I by Pope such as the ominous warning, supernatural creatures and guardians. Through these, Pope pokes fun at the characters, such as Belinda, in the hope of pointing out the triviality of the argument between the two feuding families the play is concerned with. The first epic convention Pope parodies is the invocation of the muse in the form of "Caryll" - John Caryll (a friend who had asked Pope to write the poem in the hope of uniting the two families through humour). ...read more.

This clearly parodies the traditional epic guardian who has the power to guide and protect. Through his mocking of the Sylphs, who think they "contrive it all" but actually do nothing, Pope suggests that the families' argument is due to their own fault and no-one else's. A typical epic convention is the extensive description of the soldiers preparing for battle, such as in The Iliad where Homer extensively describes the armour and weaponry of Achilles - the hero of the story. Perhaps Pope was influenced greatly through his readings of Homer's work - which he carried out from a young age - but he also chooses to describe Belinda as if she was going off to battle by detailing her preparation, using her "Puffs, Powders, Patches, Bible, Billet-doux". ...read more.

God - or Gods for that matter - are continuously used throughout epic tales and myths and in this tale, Pope seems to paint Belinda as someone of an almost god-like status for she has eyes that can "eclipse the day" and she is "A Youth more glitt'ring than a Birth-night Beau". However, Pope immediately mocks this portrayal of Belinda as pure and beautiful by remarking upon her "slumber" which "caus'd her cheek to glow". Pope implies that she is not as pure as she should be which clearly contradicts her being anything special that should be guarded. This almost borders spite which perhaps originates from Pope's bitter nature in terms of romance. It is clear that Pope successfully mocks and satirises society and Belinda through his use of the epic conventions and by this success, the true triviality of high class society and Belinda is clearly understood. ?? ?? ?? ?? ...read more.