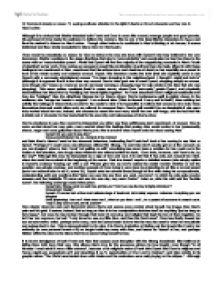 Equus Essay. Although it is obvious that Shaffer intended both Frank and Dora to seem like normal, average people and good parents, his portrayal of Dora leads the audience to believe the contrary. She is one of the least likable characters in Equus and t

Q: Comment closely on scene 11, paying particular attention to the light it sheds on Dora's character and her role in Alan's crime Although it is obvious that Shaffer intended both Frank and Dora to seem like normal, average people and good parents, his portrayal of Dora leads the audience to believe the contrary. She is one of the least likable characters in Equus and thus the easiest to blame for Alan's crime. Though other factors do contribute to Alan's blinding of six horses, it seems instinctual and thus wholly acceptable to blame Dora for Alan's pain. There would be absolutely no reason for Dora to behave the way she does with Dysart if she truly believed in her own innocence: Shaffer mentions in the stage directions that she is "uncomfortable" and punctuates her last few lines in the scene with an "uncomfortable pause". Afraid that Dysart will find the majority of the magnetizing moments in Alan's "chain of shackles" as her work, Dora makes up excuses to mask this combination of guilt and fear she feels. Mixed in with these feelings is her resentment of Alan, resentment that his actions have cast shadows of doubt on her capability as a parent in front of the whole society and society's mascot: Dysart. She therefore masks the truth (that she explicitly came to see Dysart) with a nervously administered excuse: "I've been shopping in the neighbourhood. ...read more.

Ashamed. Everything you can imagine! Dora [exploding]: And me? What about me?...What do you think I am?...I'm a parent of course-so it doesn't count. Thats a dirty word in here, isn't it, 'parent'? Dora clearly views her pain and discomfort above Alan's and seems more worried about herself, her image, than Alan's pain and his grief. It seems, indeed, that as long as Alan is in her manipulative clutches she'll do anything "just as long as he's happy", but once he has broken through that bond of normalcy and religion that kept the two of them together, he isn't her son anymore, but evil. "I only know he was my little Alan, and then the Devil came". Dora has finally viewed her son as subversive, weird, perhaps even crazy, and she cannot seem to love him the way she used to when he was pliable and subservient to her. This is demonstrated by the slap, it is Dora's frustration at finding out that (much like Frank), her authority (or own personal brand of it) no longer holds any sway with Alan, and hence he "stares" at her, and perhaps hidden within the stare is the blame that Dora cannot bring herself to face. It is Dora's indulgence of both Frank and Alan that causes such disruption with the Strang household. She believes in letting them both have their way. ...read more.

In telling Dysart about the picture (and slapping Alan) she cuts the last of her ties with her son and sides with her husband, even her phrasing indicative of this new allegiance "You see, there's something Mr. Strang and I thought you ought to know. We discussed it, and it might just be important". It is odd to note, though, that she stills holds on to hope for her son, as her visit indicates. She is still willing to sneak behind Frank's back to visit Alan, "Perhaps if I could come one afternoon without Mr. Strang". Dora's tendency to sneak behind her husband's back with Alan leaves a formidable impression on him. Frank describes the pair as being "thick as thieves", and tells Dysart that Dora whispers stories and religion to her son in his room "hour after hour", with the door closed, and Dora "conspiratorially" sneaks Alan over to a neighbour's to watch television. Dora's sneakiness and leniency foster Alan's hatred and deification of the repressive Frank, delaying his revelation that dad was "nothing special", a revelation which empowered him to have s*x with Jill and consequently blind the six horses. Though Alan's crime is supposed to seem a strange concoction of linked events, emotions and stories, along with a hint of something completely unique, the motivations behind his crime seem to stem from Dora, who, despite her arguments against such a claim, is really not a good mother at all. ...read more.