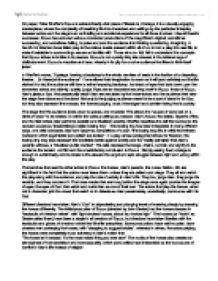 On paper, Peter Shaffer's Equus is extraordinarily vivid piece of literature. Onstage, it is a visually engaging masterpiece, where the complexity of breathing life into characters and settings by the perfected interplay between actors and the stage is an enthralling and emotional experience for all those involved. Like all theatric successes, Equus has endured various convoluted productions of the magnificent original, sometimes succeeding, and sometimes failing, to poke and prod the audience into thinking-questioning- imagining. A handful of directors have fallen prey to the vicious desire present within all of us: to turn a play into real life; to make it relatable to surroundings we are so familiar with. Those who do- fail; fail to understand the concepts that Equus strives to imbibe in its readers. Equus is not a pretty fairy tale dressed in the tattered rags of disillusionment, Equus is macabre and bare, miserly in its pity for a na�ve audience that likes to think itself jaded. In Shaffer's words, "Upstage, forming a backdrop to the whole, are tiers of seats in the fashion of a dissecting theatre... [In these] sit the audience". If one allows their imagination to roam as it will (and definitely as Shaffer wished it to be) ...read more.

They too, judge Alan, they judge his worship, and they condemn it. The horse masks that are hung behind the stage once again provide the images of eyes, the eyes of God, that watch and mark Alan as one of their own. The actors that play the horses, when not in character, join the crowd that watch on in distaste as Alan passionately, ecstatically, communes with his God. Different directors have taken Alan's "God" to skyrocketing and plunging levels of meaning simply by dressing the horses differently. The initial production of Equus (directed by John Dexter) had the horses dressed in "tracksuits of chestnut velvet", with "light strutted hooves, about four inches high". The hooves (or "hoofs" as Dexter called them) have been a staple in all versions of Equus, but directors have taken liberties with the tracksuits and gloves of chestnut velvet that Shaffer prescribes. Some productions have well muscled, bare-chested men portraying the horses, with "strapping to suggest bridles", whereas in others, the actors playing the horses were completely n**e, adhering to Alan's notion that "The horse isn't dressed. It's the most naked thing you ever saw!" The nudity of the horses also creates an atmosphere of homoeroticism and homosexuality, which some critics have interpreted as the true source of conflict in Alan's life instead of religion. ...read more.

Most interesting of all though, is the actual dissection of Alan and the tantalizingly concealed hints that clue the audience in too late: that Equus is a story told by Dysart. He is the only actor to ever address the audience, and the odd flashbacks and strange time lapses make sense...if one were to consider them happening in Dysart's memory. The fact that we are seeing Alan through Dysart's eyes changes the way we view Alan. We grow to pity him, feel empathy for him, and even envy him. This is not because Alan is a genuinely compelling character (his story told from the viewpoint of Dysart's associates, perhaps, would cause the audience to turn against him), but because Dysart envies him and admires him and views Alan positively, as something good, something worthy of sympathy. The story being told from Dysart's point of view also makes it seem more like a psychological detective story, complete with a crime, clues, and a whydunnit conclusion. Peter Shaffer's dramatic psychological thriller, Equus, is definitely the sum of all of its parts. A glorious mix of suspense, drama and pure controversy, Equus comes alive to the audience in a provokingly tangible way as a shimmering, stomping, tossing deity. ...read more.