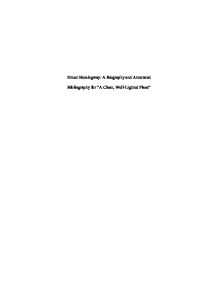 Ernest Hemingway: A Biography and Annotated Bibliography for

Ernest Hemingway: A Biography and Annotated Bibliography for "A Clean, Well-Lighted Place" Ernest Hemingway: A Biography and Annotated Bibliography for "A Clean, Well-Lighted Place" Ernest Miller Hemingway was a man who loved what he did, and that was writing. Not only that, he lived what he wrote, although many of the stories embellish the truth. In fact "it's difficult not to confuse him with the heroes of his books" who lived and loved hard, exactly like Hemingway did (Sussman 21). This attitude was present all through his many experiences from growing up, going through war, living abroad, and writing through it all. Author Ernest Hemingway entered the world on July 21, 1899 as the second child of Dr. Clarence Hemingway and his wife Grace. Born in the small town of Oak Park, Illinois, his birth seemed trivial to the rest of the world. Yet, there would come the day when he would be known as one of the most important writers in America, an icon in his own right (Harmon 91). Before that came to pass, however, he was just a small boy attending grade school with his "twin" Marcelline in Oak Park. ...read more.

While he loved his job as a reporter, war was calling him, and although he could not be drafted into the military due to poor eyesight, Ernest found a way to Italy via the Red Cross (Harmon 88). A month into his service as an ambulance driver in Italy he was seriously wounded by shrapnel from a mortar shell. "The experience had a profound emotional impact on him," and he drew upon it when writing many of his stories (Sussman 21). Upon returning to the United States after World War I, Hemingway, worked for the Toronto Star.He also lived for a short time in Chicago where he met and married Hadley Richardson in 1921. The couple moved to Paris, where Hemingway served as foreign correspondent for the Toronto Star. The Hemingways lived in Paris from 1921-1926. It was during this time that Hemingway wrote: Three Stories and Ten Poems and the highly acclaimed In Our Time. These publishings were also accompanied by the birth of his son John. Although they were recognized stories, it was his novel The Sun Also Rises that gave the author his solid reputation as a writer (Harmon 89). ...read more.

In the years following World War II, many critics said Hemingway's best writing was past and that his paranoia had gotten the best of him. But he surprised them all by publishing the novel, "The Old Man and the Sea", about a poor Cuban fisherman's struggle to land a great fish. This work led to his Pulitzer Prize in 1952. Two years later he received the Nobel Prize in Literature (Sussman 21). Hemingway's years after these awards saw few works as successful as his earlier writings or novel. The effects of Ernest's lifelong depressions, illnesses and accidents were catching up with him. As he became less and less able to keep his depression at bay, Mary decided to check him into the Mayo Clinic for electroshock therapy (Harmon 91). While this helped for a short time Hemingway was still in a devastating state. In July 1961, seven years after winning the Nobel Prize, a physically and mentally depressed Ernest Miller Hemingway ended his life with a gun shot to the head (Sussman 21). But as he had hoped, his writing lives on. His works continue to sell very well, and he continues to be an influence to writers and readers alike, with his literary style. 1 ...read more.