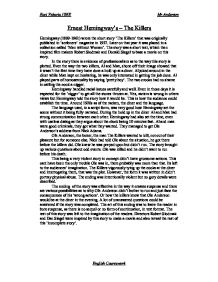 Ernest Hemingway's - The Killers Hemingway (1899-1961) wrote the short story 'The Killers' that was originally published in 'scribners' magazine in 1927. Later on that year it was placed in a collection called 'Men without Women'. The story was a short text, which then inspired film makers Robert Siodmak and Donald Siegel to base a movie on this story. In the story there is evidence of professionalism as to the way this story is plotted. Even the way the two killers, Al and Max, shone off their image showed that it wasn't the first time they have done a hold up at a diner. Al joked around in the diner while Max kept on hesitating, he was only interested in getting the job done. Al played parts of homosexuality by saying 'pretty boy'. The two crooks had no shame in calling the cook a n****r. Hemingway handled racial issues carefully and well. Even in those days it is expected for the 'n****r' to get all the stones thrown at. Yes, r****m is wrong in others views but Hemingway told the story how it would be. ...read more.

The rest of this story was left to the imagination of the readers. Directors Robert Siodmak and Dan Siegel were inspired by this story to make a movie and also reveal the rest of this 'incomplete story'. The Directors made a black and white movie. The movie skated along the same lines according to the text. It was set in a diner; the killers were their characters as it describes them in the text. Directors showed great professionalism in cutting out the word 'n****r', which did make the story less real as in those days it was expected for the black individual to get the grief. The decision made by the directors was made wisely because if they wanted to make millions, only a limited amount of money can be raised with only white viewers, as there would be a minor population of black viewers due to the r****t comments. Therefore the directors had to cut out some remarks so there was a greater chance for the movie to succeed. The film still stays faithful to the original story as the story line does not change, only some dialog is altered with. ...read more.

Also the victim was not a boxer he was a teacher to the blind. The colour film could have caused a few problems to understand as the brain would need to take in a lot of information for different details as oppose to the black and white movie. In this variation of 'The Killers' the two killers interrogate a blind secretary instead of a bartender (Nick Adams) they portrayed less violence, as they just shook the lady. There was no tying anyone up or any crude remarks. Even though the scene settings and characters had been played about with, this film still stayed faithful to the original story. It follows the same concept. The media in the days of this colour film, audiences could stand some violence and could take swearing in less offence. As the generation had moved on, respect for non- violence, non-s****l and mild language had faded away. Nowadays children are easily exploited to s*x, drugs, swearing and violence. If another version of 'the killers' was made today then it would be much stronger as the directors know majority of the people today would easily be able to handle it. The killers was a great story, an unfinished story that led film makers to finish. ?? ?? ?? ?? Ravi Vekaria 10KE Mr.Anderson English Coursework ...read more.