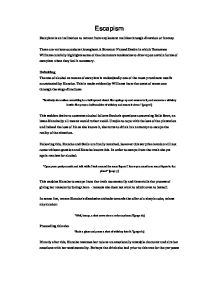 Escapism in A Streetcar Named Desire by Tennessee Williams

Escapism Escapism is an inclination to retreat from unpleasant realities through diversion or fantasy. There are various occasions throughout A Streetcar Named Desire in which Tennessee Williams carefully highlights some of the characters tendencies to draw upon certain forms of escapism when they feel it necessary. Drinking The use of alcohol as means of escapism is undoubtedly one of the most prominent motifs accentuated by Blanche. This is made evident by Williams from the onset of scene one through the stage directions: "Suddenly she notices something in a half opened closet. She springs up and crosses to it, and removes a whiskey bottle. She pours a half tumbler of whiskey and tosses it down." [page 6] This sudden desire to consume alcohol follows Eunice's questions concerning Belle Reve, an issue Blanche by all means would rather avoid. Unable to cope with the loss of the plantation and indeed the loss of life as she knows it, she turns to drink in an attempt to escape the reality of the situation. Following this, Blanche and Stella are finally reunited, however this surprise reunion will not come without question and Blanche knows this. ...read more.

"Blanche staggers back from the window and falls to her knees." In one swift scene, Blanche has now lost her hope of regaining a stable future. In the stage directions in scene ten Tennessee Williams describes how "a few hours later that night. Blanche has been drinking fairly steadily since Mitch left." Blanche resorts to becoming intoxicated as she can find no other way to deal with the harsh reality that presents itself to her. Her hopes to marry Mitch are completely shattered and thus so is the dream. Although it is mainly Blanche who uses alcohol as a form of escapism, it can be argued that Stanley and the men also use it for the same means. For example, at the poker game in scene three the men enjoy a few shots of whiskey. Considering Mitch's relationship with his sick mother, it is understandable that he wants to escape from his responsibilities and for once, play a game. Stanley on the other hand becomes quite inebriated, perhaps trying to get away from worries about the intrusion of Blanche on his territory, and to escape further into the game. s****l Promiscuity Williams also highlights the tendency of Blanche to use s****l relationships to flee into a world of fantasy. ...read more.

Mitch points out Blanche's avoidance of light in Scene Nine, when he confronts her with the stories Stanley has told him of her past. Mitch then forces Blanche to stand under the direct light. When he tells her that he doesn't mind her age, just her deceitfulness, Blanche responds by saying that she doesn't mean any harm. She believes that magic, rather than reality, represents life as it ought to be. Blanche's inability to tolerate light means that her grasp on reality is also nearing its end. In Scene Six, Blanche tells Mitch that being in love with her husband, Allan Grey, was like having the world revealed in bright, vivid light. Since Allan's suicide, Blanche says, the bright light has been missing. Through all of Blanche's inconsequential s****l affairs with other men, she has experienced only dim light. Bright light, therefore, represents Blanche's youthful s****l innocence, while poor light represents her s****l maturity and disillusionment. Phone Calls Lack of escapism When examining this topic, one also has to think of the lack of escapism that Blanche so desperately seeks. This insufficiency of escapism can be seen due to the confining Kowalski apartment in which she stays in. The claustrophobic flat and the hectic incidents that occur within these walls leave little room for a way out. ...read more.