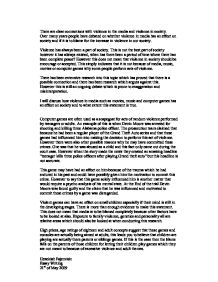 There are clear connections with violence in the media and violence in society. Over many years people have debated on whether violence in media has an effect on society and if it is to blame for the increase in violence in our society. Violence has always been a part of society. This is not the best part of society however it has always existed, when has there been a period of time where there has been complete peace? However this does not mean that violence in society should be encourage or accepted. This simply indicates that it is not because of media, music, movies or computer games why some people perform acts of violence. There has been extensive research into this topic which has proved that there is a possible connection and there has been research which argues against this. However this is still an ongoing debate which is prone to exaggeration and misinterpretation. I will discuss how violence in media such as movies, music and computer games has an effect on society and to what extent this statement is true. Computer games are often used as a scapegoat for acts of random violence performed by teenagers or adults. An example of this is when Devin Moore was arrested for shooting and killing three Alabama police officer. ...read more.

Movies which keep the viewer in a tense state can leave the viewer fearful and nervous; however horror movies are still released in the cinema and on DVD and Blu-ray. Movie production such as SAW and Hostel show excessive violence which can be traumatising to individuals, certain scenes in these movies are disturbing and very detailed. Both movies have an 18 rating and are considered highly vulgar. Both movies have a following and have reported high sales figures in the DVD market and numerous sequels which is an indication that even though they are extremely violent and disturbing the general public enjoys them. Action movies which involve guns and killings can also influence individuals however the same argument stands which is that it is only a minority of individuals which try to rein act these events in the real world. Whenever a film which can be considered controversial is released a message is shown to the audience informing them the views expressed in the motion picture are not the views of the company which released the film. Also in television shows such as Jackass they put a clear warning at the beginning not to try and recreate what they are about to see and not to send any tapes into MTV of copy cat acts. ...read more.

Censoring this type of media will not only insult the millions of adults which play these games and watch these movies around the world but it will indicate that adults are not held responsible for their actions. The problem which is increasing violence should be looked at as the problem instead of passing the blame of this onto media outlets. To say that media is the cause of the increase of violence in society is not completely true however media does have to accept responsibility for promoting and advertising violence to society which can have an effect on society indirectly. By promoting violence, violence will become viewed as acceptable and morally correct. Children are impressionable and that is the reason why they should not be exposed to media which can be considered influential. Parents and Guardians should take this into consideration when purchasing media which is violent if they are not 100 percent sure that children will not have access to it. Parents and Guardians also need to take responsibility for allowing there children to play, watch or listen to this type media. It is already illegal to sell adult products to children however that is not all that needs to be done to ensure children do not have access to these games, films or music. Parents and guardians need to make sure that they keep these games, films and music away from their children for their safety. ...read more.