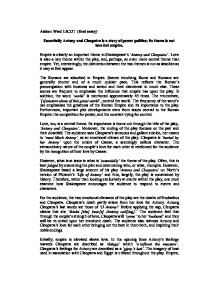 Essentially Antony and Cleopatra is a story of power politics; its theme is not love but empire.

Aisleen Ward L6COT (final essay) Essentially Antony and Cleopatra is a story of power politics; its theme is not love but empire. Empire is clearly an important theme in Shakespeare's 'Antony and Cleopatra'. Love is also a key theme within the play, and, perhaps, an even more central theme than empire. Yet, interestingly, the distinction between the two themes is not as absolute as it may at first appear. The Romans are absorbed in Empire. Scenes involving Rome and Romans are generally shorter and of a much quicker pace. This reflects the Roman's preoccupation with business and action and their disinterest in much else. These scenes are frequent to emphasise the influence that empire has upon the play. In addition, the word 'world' is mentioned approximately 45 times. The triumvirate, '[s]enators alone of this great world', control the world. The frequency of the word's use emphasises the greatness of the Roman Empire and its importance to the play. Furthermore, important plot developments stem from issues central to the Roman Empire: the competition for power, and the constant vying for control. Love, too, is a central theme. Its importance is borne out through the title of the play, 'Antony and Cleopatra'. Moreover, the ending of the play focuses on the pair and their downfall. The audience sees Cleopatra's sensuous and gallant suicide, her means to 'meet Mark Antony', as an emotional climax of the play. Cleopatra is 'buried by her Antony' upon the orders of Caesar, a seemingly callous character. The extraordinary nature of the couple's love for each other is reinforced for the audience by the recognition of their love by Caesar. However, what is at issue is what is 'essentially' the theme of the play. ...read more.

Previously, upon hearing the news that Antony is 'bound unto Octavia', Cleopatra says 'pity me, Charmian'. The audience do pity Cleopatra and are not pleased that Antony and Octavia are married. Later, when Enobarbus states that Antony 'will to his Egyptian dish again', the audience are pleased, even though Antony's decision will clearly jeopardise his position in Empire. Moreover, in the face of adversity, Antony and Cleopatra's love appears to deepen. When Eros is fumbling with Antony's armour, because he is nervous that Antony will lose the battle, Cleopatra acts very bravely. Motivated and inspired by her feeling for Antony she arms him herself proving the maturity and genuineness of her love. Her bravery is further displayed when, again inspired by Antony, she takes her own life. As their love deepens, it inspires them to acts of nobility. The audience sees both Antony and Cleopatra's suicides as highly noble. Antony's botched suicide is somewhat absurd but Antony kills himself for noble reasons. He does not want to 'be windowed in great Rome' by Caesar and wishes to die as 'a Roman by a Roman /Valiantly vanquished'. Antony's strength of feeling is emphasised by the use of alliteration. Moreover, Antony kills himself in part to be with Cleopatra and because 'Dido and her Aeneas shall want troops /And all the haunt be ours', an image of both Antony and Cleopatra ruling in the afterlife and being together forever. It is suggested that they transcend into the after-life by achieving immortality when Cleopatra claims that '[e]ternity was in [their] lips and eyes'. This language seems somewhat exaggerated but, having witnessed the exceptional nature of their love for each other throughout the play and what it inspires them to do, the audience are more willing to believe it. ...read more.

You're caught.'' The couple use the same language to talk of their love as with Empire, two seemingly different subjects. Power politics is inherent to the love relations between the two protagonists. Cleopatra claims that she has 'no power upon [Antony]' but following Cleopatra's betrayal in the battle at sea, Antony claims that his 'heart was to [her] rudder tied by th'strings'. Cleopatra says that '[she]'ll have' 'Herod's head' but without Antony there, wonders how she 'might command it.' She feels powerless because Mark Antony has married Octavia. She uses the language of empire but is transposed to love. Politics is such an integral part of Antony and Cleopatra's relationship that the couple recognise it themselves. Cleopatra describes how she 'wore his sword Philippan' when they were drunk and Antony had fallen asleep. The sword is a phallic symbol and through Cleopatra's removal of it, there is the suggestion that she is emasculating him and removing his power. She also dresses him in her clothes, emasculating him further. Cleopatra enjoys exercising power over Antony who is in control of at least a third of the world. Moreover, this scene occurs very soon after Cleopatra's description of Antony as the fishes she intends to catch, thus further emphasising her want for power. Due to the close relationship between both love and Empire throughout the play, it is difficult to assess which is 'essentially' the more important theme. Clearly though, love is a major theme within the play, and is certainly no less important than Empire. At the end of the play, Caesar and thus, Empire, are triumphant because of his rationality. Despite the similarity of the two major themes, love is, perhaps, the resounding theme in that it is the theme that leaves the audience with the greatest sense of satisfaction. WORDS: 2944 ...read more.