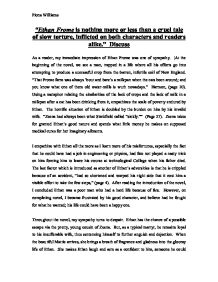 &quot;Ethan Fromeis nothing more or less than a cruel tale of slow torture, inflicted on both characters and readers alike&quot; Discuss.

"Ethan Frome is nothing more or less than a cruel tale of slow torture, inflicted on both characters and readers alike." Discuss As a reader, my immediate impression of Ethan Frome was one of sympathy. |At the beginning of the novel, we see a man, trapped in a life where all his efforts go into attempting to produce a successful crop from the barren, infertile soil of New England. "That Frome farm was always 'bout and bare's a milkpan when the cats been around; and you know what one of them old water-mills is wuth nowadays." Harmon, (page 10). Using a metaphor relating the similarities of the lack of crops and the lack of milk in a milkpan after a cat has been drinking from it, empathizes the scale of poverty endured by Ethan. The horrific situation of Ethan is doubled by the burden on him by his invalid wife. "Zeena had always been what Starkfield called "sickly."" (Page 27). Zeena takes for granted Ethan's good nature and spends what little money he makes on supposed medical cures for her imaginary ailments. I empathize with Ethan all the more as I learn more of his misfortunes, especially the fact that he could have had a job in engineering or physics, had fate not played a nasty trick on him forcing him to leave his course at technological College when his father died. ...read more.

(Page 27). This simplistic action infuriates Zeena who is oozing with disdain and is watching her own husband fall in love with the younger Mattie. As the relationship between Mattie and Ethan progress, I become more infuriated, as I imagine, did the characters. The only thing keeping them apart was Zeena. My opinion is that why have two people unhappy out of three when you only need to have one. Zeena would probably be a melancholy hypochondriac in whatever situation she was placed, her evident jealousy is impossible to hide, "She's a pauper that's hung onto us after her father'd done his best to ruin us." (Page 86). Whether this is jealousy or simply forward planning in cutting costs is debatable but I believe her to see Mattie as a rival. Throughout the novel there are many moments where there is obvious sexual tension between Mattie and Ethan. This is especially true when Zeena is away visiting a doctor. They both love each other so much but in their hearts are such good, pure and loyal people; they refuse to act on their impulses, thus deepening their misery. Ethan does too contain jealousy but only for his beloved Mattie, when discussing the prospects of weddings with her, "A pang shot through Ethan," (page 69) ...read more.

Mattie is scarred with the horror of a broken back. The situation is slightly reversed in that Zeena (who is scarcely more alive than Mattie and Ethan) must now grudgingly watch over the other two true invalids. The story (excluding the introduction and the conclusion) begins and ends in very similar ways - using snow imagery in the presence of Ethan. However, at the beginning, there is moderate hope about what the future holds for young Ethan Frome and at the end, we see a hardened, bitter man who has had a life full of bad luck and undeserved misfortune thrown at him by fate. By the end of the novel, we see that he has learnt that bad things happen to him and he must compensate for them in his daily chores and carry on as best as he can. The first thought that crosses his mind after the realization that he and Mattie survived their attempt at fetching is that his horse needs feeding, "Far off, he heard the sorrel whinny, and thought, "I ought to be getting him his feed....."" (Page 126) I feel immense pity for the man but I do feel I have been tortured reading the novel by the slow trickle of misfortune that slowly descends on Mattie and Ethan, eventually sentencing them to a fate worse than death, which neither of them fully deserves. Had Ethan just run off with Mattie, and taken his chance, he might have lived a happy life. Fiona Williams ...read more.