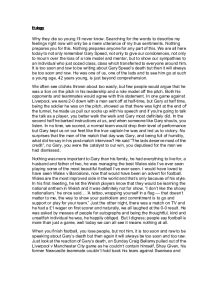 Eulogy Why they die so young I'll never know. Searching for the words to describe my feelings right now will only be a mere utterance of my true sentiments. Nothing prepares you for this. Nothing prepares anyone for any part of this. We are all here today to not only remember Gary Speed, not only to give our condolences, not only to mourn over the loss of a role model and mentor, but to show our sympathies to an individual who just oozed class, class which transferred to everyone around him. It is too soon and raw to be writing about Gary Speed's death but then it will always be too soon and raw. He was one of us, one of the lads and to see him go at such a young age, 42 years young, is just beyond comprehension. ...read more.

No surprises that the man of the match that day was Gary, and being full of humility, what did he say in his post-match interview? He said "The lads deserve most of the credit", no Gary, you were the catalyst to our win, you deputised for the man we had dismissed. Nothing was more important to Gary than his family, he had everything to live for, a husband and father of two, he was managing the best Wales side I've ever seen playing some of the most beautiful football I've ever seen. I would have loved to have seen Wales v Barcelona, now that would have been an advert for football. Wales are the most improved side in the world and that's only because of his style. In his first meeting, he let the Welsh players know that they would be learning the national anthem in Welsh and it was definitely not for show, "I don't like the showy nationalism,' he once said... ...read more.

contain himself, Shay Given, his former Newcastle teammate couldn't hold back his tears against Swansea and John Hartson, who was commentating on the same game, left to go home as he was left literally speechless. If there is anyone who still doubts the greatness of this man, if there is anyone who still doubts the legacy this man left, then you, my friend, are living in a world different from ours. The world is mourning at your death Gary, you've left us all in tears, why did you die so young? Why did you die so young? Today is a difficult day for me, you and the whole world. We're all still struggling to come to terms with what has happened. My words today do not even begin to give him the praise he requires, rest in peace Gary, rest in peace. There's only one Gary Speedo, there's only one Gary Speedo, one Gary Speedo. Word Count: 780 ...read more.