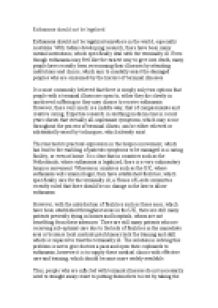 Euthanasia should not be legalised

﻿Euthanasia should not be legalised Euthanasia should not be legalized anywhere in the world, especially Australia. With todays developing research, there have been many mental institutions, which specifically deal with the terminally ill. Even though euthanasia may feel like the easiest way to give into death, many people have recently been overcoming their illnesses by attending institutions and clinics, which aim to mentally assist the damaged peoples who are consumed by the horrors of terminal illnesses. It is most commonly believed that there is simply only two options that people with a terminal illness are open to; either they die slowly in unrelieved suffering or they may choose to receive euthanasia. However, there very much is a middle way, that of compassionate and creative caring. Expertise research in soothing medicine has in recent years shown that virtually all-unpleasant symptoms, which may occur throughout the process of terminal illness, can be either relieved or substantially eased by techniques, which already exist. ...read more.

Patients with terminal illnesses are regularly found to be very vulnerable. Someone under the influence of a terminal illness will lack the knowledge and the skills to alleviate and interpret his own symptoms, and will most likely be suffering from fear about what the future will hold, and the effect in which the illness is having on others around him. Those whom regularly manage terminally ill patients tend to quickly recognize that they often suffer from depression or a false sense of worthlessness, which un doubtedly takes a toll on their ability to judge. In the current stages of their illness, patients often suffer from confusion, dementia, which inevitably lead to the lack of their ability to make sufficient and positive decisions, however this could easily be relieved with appropriate treatment. Patients who on admission say let me die, typically after effective symptom relief, are most grateful that their appeal was not complied to. ...read more.

Therefore, there is no reason to commit voluntary euthanasia as of yet, because no matter what state your body is educed in. There will always be hope, as evidence has recently shown. Voluntary euthanasia should not be legalized in Australia. Due to the recent research and facilities, which have been applied and put into action in certain western countries such as UK, many patients have been in awe due to the remarkable outcomes which not only they have received personally however the miraculous journey that their family persisted with them. Thus, people who are influenced by terminal illnesses may become mentally and physically weak, they may feel they have no worth anymore, they may feel that their family no longer wants to put up with them due to lack of resources or money. However, with encouragement by not only the ill?s family however also their doctors, terminal illnesses can easily be overcome. Voluntary euthanasia is un necessary in todays developing communities. ...read more.