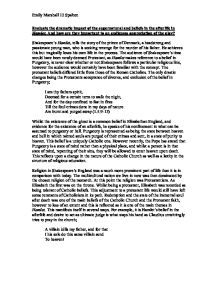 Evaluate the dramatic impact of the supernatural and beliefs in the afterlife in Hamlet. And how are they important to an audiences appreciation of the play?

Evaluate the dramatic impact of the supernatural and beliefs in the afterlife in Hamlet. And how are they important to an audiences appreciation of the play? Shakespeare's Hamlet, tells the story of the prince of Denmark, a headstrong and passionate young man, who is seeking revenge for the murder of his father. He achieves this but tragically loses his own life in the process. The audience of Shakespeare's time would have been newly deemed Protestant, as Hamlet makes reference to a belief in Purgatory, is never clear whether or not Shakespeare follows a particular religious line, however the audience would certainly have been familiar with the concept. The protestant beliefs differed little from those of the Roman Catholics. The only drastic changes being the Protestants acceptance of divorce, and exclusion of the belief in Purgatory; I am thy fathers spirit, Doomed for a certain term to walk the night, And for the day confined to fast in fires Till the foul crimes done in my days of nature Are burnt and purged away (1.5.9-13) Whilst the existence of the ghost is a common belief in Elizabethan England, and evidence for the existence of an afterlife, he speaks of his confinement in what can be assumed to purgatory or hell. ...read more.

Whether the ghost of Old Hamlet is residing in hell or Purgatory is an issue which Shakespeare leaves open and unresolved. This leaves the Shakespearean audience with the question of whether there was a hope of redemption for Old Hamlet, and in relation themselves. The ghost uses a great deal of apocalyptic imagery, heightening the dramatic impact of his words on the modern and contextual audience; Oh horrible, oh horrible, most horrible! If thou hast nature in thee bare it not Let not the royal bed of Denmark be A couch for luxury and damned incest (1.5.80-84) The relationship between Claudius and Gertrude would have been seen as incest n Shakespeare's time, whilst it would be more acceptable today. This declaration is seen coming from the mouth of the ghost. To a contextual audience, this would greatly increase the sense of urgency, and condemn incest as being against god. This shows the audience of Shakespeare's time was far more greatly affected by the supernatural, religion and the afterlife than today. As today, our understanding of religious teaching is far less comprehensive than this, and applies to a far smaller proportion of society. Shakespeare's accuracy regarding religious beliefs of the time would have had a far larger impact on the audiences of the time, as these beliefs directly related to their lives. ...read more.

This is a recurring idea in Shakespearean tragedy, as shown by Lady Macbeths cry of "Out! Out! Damned spot!" the soul could be kept white by living a good and virtuous life devoted to God. Regular attendance at church, mandatory by law, ensured the indoctrination of the masses with ideas including this one. And so the dramatic impact would have been far greater than it is today. As today's community is based on scientific rather than religious advancement, the dramatic impact is significantly lessened. Issues such as the way in which Gertrude and Ophelia are portrayed, Claudius' incestuous behavior, and Hamlet's inner torment are more of a dramatic focus of the modern audience. This is due to religion becoming a less dominant part of life, the advancement of science and technology, the building up of cohabitation, and a growing multicultural society due to mass immigration during the first and second world wars, and later conflicts. Catholic beliefs apply to a much smaller percentage of the population. The structured understanding of Shakespeare and his audience is less applicable today and less widely accepted. Beliefs in the afterlife are less important to today's audience's appreciation of Hamlet then in the 17th century. Emily Marshall 12 Spalton ...read more.