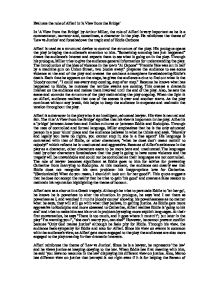 Evaluate the role of Alfieri in 'A View from the Bridge' In 'A View from the Bridge' by Arthur Miller, the role of Alfieri is very important as he is a commentator, narrator and, sometimes, a character in the play. He reinforces the theme of 'Law vs Justice' and foreshadows the tragic end of Eddie Carbone Alfieri is used as a structural device to control the structure of the play. His prologue opens the play bringing the audience's attention to him. "Something amusing has just happened" draws the audience's interest and expects them to see what is going on in the play. Through his prologue, Miller tries to give the audience general information for understanding the play. The introduction of the idea of violence in the town "Al Capone" "Frankie Yale was cut in half by a machine gun on Union Street, two blocks away." prepares the audience to see some violence at the end of the play and creates the ominous atmosphere foreshadowing Eddie's death. Each time he appears on the stage, he gives the audience a clue to find out what is the 'b****y course'. ...read more.

"Morally and legally you have no rights, you cannot stop it; she is a free agent!" His language is contrasted with that of Eddie, or other characters; "what he does don't mean nothin' to nobody!" which reflects he is uneducated and aggressive. Because of Alfieri's existence in the play as a character, other characters seem to be more bare and uneducated. The languages used by other characters foreshadows that the play is going to have some violence and the tragedy will be unavoidable and could not be controlled as their languages are not controlled. The role of lawyer becomes significant as Eddie goes to him for advice for preventing Catherine from marrying to Rodolpho. At this moment, the audience can clearly see that Eddie does not recognize his own problem- his inappropriate love for Catherine. "(Sardonically) What do you mean, I shouldn't look out for her good?". This quote suggests that he does not accept the reality that he tries to gain 'his good' and creates a false reason to maintain his reputation highlighting the theme of honour. ...read more.

When Eddie has first meeting with him, he said 'you have no resource in the law' displaying his different view on justice. Also, Marco has different view on justice that betrayal is not right even if it is for helping the Bereau of Immigration. "All the law is not in a book." foreshadows that Marco will carry out what he believes in justice by killing Eddie. Eddie and Marco represent justice because they take the law into their own hands. Alfieri sees that when people go against the law to do justice, it can lead to conflict and even death. The line 'it is better to settle for half' suggests that he believes that it is better to rely on the law and accept it even when we are half satisfied. Alfieri makes the audience think of what they think as justice and make a judgment at the end of the play. The role of Alfieri is significant in 'A View from the Bridge'. He represents the law, making the audience think of what is justice. By using a character of Alfieri, Miller makes the play tight and keeps the audience in suspense until the end. ...read more.