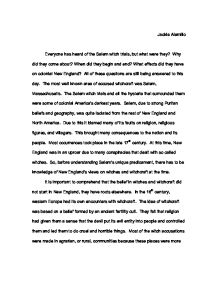 Everyone has heard of the Salem witch trials, but what were they? Why did they come about? When did they begin and end? What effects did they have on colonial New England?

Jackie Alamillo Everyone has heard of the Salem witch trials, but what were they? Why did they come about? When did they begin and end? What effects did they have on colonial New England? All of these questions are still being answered to this day. The most well known area of accused witchcraft was Salem, Massachusetts. The Salem witch trials and all the hysteria that surrounded them were some of colonial America's darkest years. Salem, due to strong Puritan beliefs and geography, was quite isolated from the rest of New England and North America. Due to this it blamed many of its faults on religion, religious figures, and villagers. This brought many consequences to the nation and its people. Most occurrences took place in the late 17th century. At this time, New England was in an uproar due to many conspiracies that dealt with so called witches. So, before understanding Salem's unique predicament, there has to be knowledge of New England's views on witches and witchcraft at the time. It is important to comprehend that the belief in witches and witchcraft did not start in New England, they have roots elsewhere. ...read more.

It was a place "that plowed its own crops and made its own products" (Brown p. 2-10). This could be traced back to the strong beliefs that were placed in Puritanism and religion and the belief that all they did was in order to please God. This separation from other societies led to a distinct culture in Salem. Their society that formed in Salem was based on religion. The belief of witches and witchcraft was easily able to spawn from this. Due to the fact that the Puritans related everything in their lives to religion, they contributed the faults of the town to supernatural causes or the devil. Since the devil could not be put on trial for wrongs committed against society, the people of Salem had to find a different way to place blame. Hence the idea of witches. Witches were accused of being the root of anything that caused a disturbance in the town. If things went wrong such as crop failure, or animals dying, or children misbehaving, the town "felt that these witches were at fault" (Karlsen p. 84-90). The people of Salem believed that the devil had taken them over and controlled their actions. ...read more.

There was a sense that it was an every man for himself mentality and all that you could do was be accountable for your own actions. Salem was separated from America for reasons as well. Due to the craze of witchcraft no parts of colonial America wanted anything to do with Salem. Colonists didn't want to move into or trade with the frenzied town. Finally, Salem, like most towns at the time was separated from the world because it "was not a center for immigration or trade, which [forced Salem] to be self-dependent" (Carlson p. 92-101). These were the basic reasons from which many other problems branched. In the end, the influence of 16th century western Europe led to the maddened 17th century New England. Salem was the spot where this was most evident because of the isolation by the strong religious beliefs of Puritanism and the actual geography of the town. Witches were put into existence as scapegoats for a community's problem. The effects of the trials affected the town, young America, and the world. Salem witchcraft is one of the most confusing and puzzling occurrences in history. Even though Salem's extremely violent nature is not something to be proud of, it is a chapter in the history of the country that cannot be forgotten. ...read more.