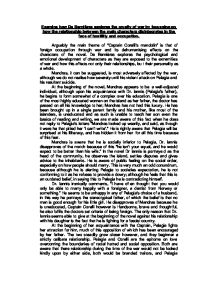 Examine how De Berni&amp;egrave;res explores the cruelty of war by focussing on how the relationship between the main characters disintegrates in the face of hostility and occupation.

Examine how De Berni�res explores the cruelty of war by focussing on how the relationship between the main characters disintegrates in the face of hostility and occupation. Arguably the main theme of "Captain Corelli's mandolin" is that of foreign occupation through war and its dehumanising effects on the characters of the novel. De Berni�res explores the psychological and emotional development of characters as they are exposed to the extremities of war and how this affects not only their relationships, but their personality as a whole. Mandras, it can be suggested, is most adversely affected by the war, although we do not realise how severely until his violent attack on Pelagia and his resultant suicide. At the beginning of the novel, Mandras appears to be a well-adjusted individual, although upon his acquaintance with Dr. Iannis (Pelagia's father), he begins to form somewhat of a complex over his education. Pelagia is one of the most highly educated women on the island as her father, the doctor has passed on all his knowledge to her; Mandras has not had this luxury. He has been brought up in a single parent family and his mother, like most of the islanders, is uneducated and as such is unable to teach her son even the basics of reading and writing, we are made aware of this fact when he does not reply to Pelagia's letters "Mandras looked up wearily, and said, as though it were he that pitied her 'I can't write'." ...read more.

Although this experience leaves him more aware of his own mortality and also the cruelty of others, it does little to enhance his understandings of the workings of the real world, these are reveal to him during his time with the EAS, a communist group. Hector, the head of the movement uses Mandras' lust for knowledge to bind him to the group, and instruct him in the ways of the group. Mandras begins his downward spiral into corruption and unhappiness at this point. He watches and begins to join in on beating, murdering and raping his own people. In depicting this, De Berni�res shows the pettiness of the political world, a lesson that is still relevant today; political parties like that of the communist party would rather fight in there own fractions then pull together and fight the enemy, in essence they are joining the enemy in persecuting their own people. Mandras as De Berni�res highlights is merely "a statistic, one more life warped and ruined by a war". Although the author encourages the belief that we are all responsible for our own actions, he also promotes her the fact that we are only alive for a short time, and at the end of the day we are all just one single person, we have not the ability to change the world by ourselves, yet we do have the aptitude to influence the lives around us, whether for the better or for the worse. ...read more.

Her feelings for Corelli are strong, even when he is forced to leave the island "putting the finishing touches to the blanket that she had crochet for her wedding...which had burgeoned flawlessly from the day of Antonio's departure". The difference between the attitudes of these two suitors can also be examined on how they react to Pelagia's embroidered waistcoat. Pelagia makes the waistcoat as a gift for Mandras, but Mandras rebukes her as he feels it is not symmetrical, Corelli on the other hand, asks to purchase the waistcoat from her, and when she informs him of Mandras' opinion, he replies that it is in not being symmetrical that things are beautiful, he uses the human face as an example "it is these things that make you beautiful....otherwise you would be a statue". The main theme of 'Captain Corelli's mandolin" is that of the effects of occupation on the inhabitants of the island. De Berni�res explores how human emotions are affected by human intolerance and cruelty and the effect this has on them. The relationships between the main characters are irrevocably altered and, in some cases, wiped out completely. De Berni�res uses Dr. Iannis to impart his wisdom to the islanders, often holding them together in difficult times. He explores the effects on people on each other and the evil as well as the good that humanity can inflict. ...read more.