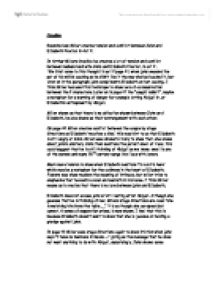 Examine how Miller creates tension and conflict between John and Elizabeth Proctor in Act 2.

Crucible Examine how Miller creates tension and conflict between John and Elizabeth Proctor in Act 2. In Arthur Millers Crucible he creates a lot of tension and conflict between husband and wife John and Elizabeth Proctor, in act 2. We first come to this thought in act 2 page 41, when john seasons the pot of his wife's cooking as he didn't like it the way she had cooked it, but later on in the paragraph john compliments Elizabeth on her cooking. I think Miller has used this technique to show lack of communication between the 2 characters. Later on in page 41 the "caught rabbit", maybe a metaphor for a warning of danger for example letting Abigail in, or Elizabeth's entrapment by Abigail. Miller shows us that there is no affection shown between John and Elizabeth, he also shows us their estrangement with each other. On page 42 Miller creates conflict between the couple by stage directions as Elizabeth 'receives a kiss', this may hint to us that Elizabeth is still angry at John. ...read more.

More conflict grows when miller allows john to become angry and find fault in Elizabeth. The tension is page 43 seems to calm down abit when Elizabeth and john discuss the fact that they are 14 people in jail awaiting trial. Also, that the governor says that these people will hang if they don't confess. Elizabeth and john begin to discuss Abigail's power in the court. Elizabeth the suggests to john that he must go to Salem and expose Abigail as a fraud. She says john should reveal what Abigail told him about 'dancing in the wood'. Conflict is shown greatly in page 44 when Elizabeth catches john out with the lie, as john reveals that he had a meeting with Abigail in a room on their own. Accusation, denial and suspicion arise as john tries to cover it up by saying they were alone for a moment, Elizabeth lost all faith in him, and Miller is showing us that they do not have trust in each other any longer. ...read more.

Hale gets john to say the 10 commandments, tension quickly arises again when john couldn't say 'adultery' but Elizabeth prompts him. News arises as Mary warren is arrested and was accused by Abigail. Elizabeth accuses Abigail of planting the puppet with the needle in; Miller had used dramatic irony once again. Miller introduces a new character - Ezekiel Cheaver "a shocked silence". There is a great deal of dramatic irony in pages 60/61 as we know that Abigail was the one that planted the doll..... In conclusion there is much more tension that increasingly arises and Miller has used many techniques cleverly to show this. Many uses of dramatic irony is shown to show conflict and tension between both husband and wife john and Elizabeth proctor, and this as shown readers the full impact of the relationship between all characters including Abigail. I think miller has used Abigail's character as the 'evil villain' maybe to show the tension between john and Elizabeth and to conclude on the marriage and how john committed adultery towards Elizabeth. ...read more.