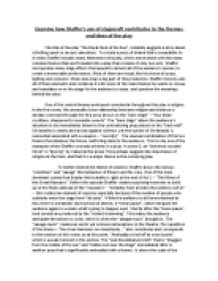 ﻿Examine how Shaffer?s use of stagecraft contributes to the themes and ideas of the play The title of the play ?The Royal Hunt of the Sun?, instantly suggests a story about a thrilling quest or an epic adventure. To create a piece of drama that is compatible to it?s title, Shaffer includes many elements in the play, which are involved with the many complex themes that are threaded into a play that consists of only two acts. Shaffer incorporates many stage effects that appeal to almost all of the audience?s senses, to create a memorable performance. Most of them are visual, like his choice of props, lighting and costume. Music also plays a big part of this production. Shaffer cleverly uses all of these elements and combines it with some of the main themes he wants to convey and translates on to the stage for the audience to enjoy, and question the meanings behind the story. One of the central themes portrayed consistently throughout the play is religion. In the first scene, the unusually close relationship between religion and violence is already conveyed through the first prop shown on the ?bare stage? ? ?four black crucifixes, sharpened to resemble swords?. The ?bare stage? allows the audience?s attention to be immediately drawn to the contradicting prop placed on the ?back wall?. ...read more.

It shows the scale of the immense slaughter that had just taken place, the destruction of the belief of the whole civilisation, and perhaps the intention of bleeding sun was to foreshadow the downfall of Atahuallpa. This whole action-packed scene emphasizes on the ruthlessness of the Spaniards, and the process of the Spaniards cruelly killing the unarmed Indians is highlighted by the dramatic sound effects and music and the symbolism of the ?rippling cloth of blood? that Shaffer puts in this scene. Another central theme that is Shaffer portrays is bravery. This is most evident in scene 8 ? ?The Mime of the Great Ascent?. The climb is to be mimed as a ?stumbling, tortuous climb into the clouds?. This is accompanied by an ?eerie, cold music made from the thin whine of huge saws?, which creates again, a perilous atmosphere, as the ?whine of huge saws? is a very unpleasant sound to listen to, which emphasizes bravery as the audience has to see a group of men hiking furiously and overcoming the ?ledges and giant chasms? in the treacherous circumstances. Shaffer also includes a description narrated by Old Martin, to further stress the poor conditions they had to undergo. ?Have you ever climbed a mountain in full armour?? ? is a rhetorical question asked by Old Martin, which invites the audience to empathize with the crew as Old Martin makes obvious that it was a hard experience for himself. ...read more.

This perhaps conveys that the Incas were more exotic with bright coloured clothing and that the Spaniards were more traditional in duller clothing. Shaffer also makes Atahuallpa dressed ?from head to foot in white?, however to present an image of ?utter simplicity? instead. In the stage direction provided, Shaffer writes, ?by contrast?, which shows his deliberate ideas to make Atahuallpa stand out as king. All the key themes and ideas are emphasized through various stagecraft techniques in the play. The clear difference between the two countries suggests that Spain is a far more advanced country, as people were able to travel, yet Peru in some sense still seemed to remain like a tribe. Shaffer conveyed that the Spaniards underestimated Peru in the beginning, but as the play progressed, the Spaniards realise that it was different to what they had expected it to be like. One of the examples in which this idea was through Atahuallpa and Pizarro?s growing friendship in the play. Some props were related to religious hypocrisy, and Shaffer?s intention was possibly to criticise the church at the time. Perhaps Shaffer also ultimately wanted the audience to take away the cruel reality of the extent people do for greed, this was shown from the ?Great Massacre? and the brave things the crew were willing to do to get to their destination to get gold, this was shown in the climb of the Andes. ...read more.