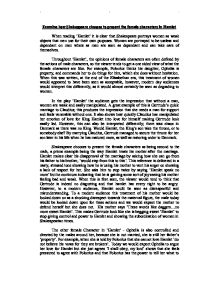 Examine how Shakespeare chooses to present the female characters in Hamlet.

Examine how Shakespeare chooses to present the female characters in Hamlet When reading 'Hamlet' it is clear that Shakespeare portrays women as weak objects that men use for their own purposes. Women are portrayed to be useless and dependant on men where as men are seen as dependant and can take care of themselves. Throughout 'Hamlet', the opinions of female characters are often defined by the actions of male characters, so the viewer tends to get a one sided view of what the female characters are like. For example, Polonius thinks his daughter, Ophelia is property, and commands her to do things for him, which she does without hesitation. When this was written, at the end of the Elizabethan era, this treatment of women would appeared to have been seen as acceptable, however, modern day audiences would interpret this differently, as it would almost certainly be seen as degrading to women. In the play 'Hamlet' the audience gets the impression that without a man, women are weak and easily manipulated. A great example of this is Gertrude's quick marriage to Claudius; this produces the impression that she needs a man for support and feels venerable without one. It also shows how quickly Claudius has manipulated her emotion of love for King Hamlet into love for himself making Gertrude look easily led. ...read more.

His telling Ophelia of who she can love shows a lack of respect for her feelings and shows us that he sees her as an object that he has control over. By Ophelia using 'my lord' it shows two things, firstly she has respect for Polonius and that he is abusing this respect and secondly with the respect she shows it indicates that Polonius has control over her, as she just wants to avoid conflict with him and agrees to what he says in order to achieve this. Gertrude also creates the impression of having no mind of her own when she asks Hamlet, 'What shall I do?' (Act 3 Scene 4 line 182) this could be due to her social responsibility, as she has always had a male figure in her life to support her and to tell her what to do showing that she needs the support of a man and that she is willing to be controlled by males, as it pleases her and makes her feel like she has some sort of direction. This makes the women appear mentally weak and small without a man to lean on, and creates the impression of an inferior species, which don't have the capacity to form do things on their own. Both of these passages show men dominating women mentally and verbally. ...read more.

Hamlet then makes her feel weak by saying 'Frailty thy name is women'. This makes Ophelia and women look like they cannot hold their ground against males, it also shows how Hamlet sees women as inferior to himself. In conclusion, Shakespeare chooses to present the female characters as a minority. This may be because having two poorly developed female characters shows how women were seen at the end of the Elizabethan era and at the start of the Jacobean era which was as objects and property of the husband, father or brother. Actions of the males towards the females create a feeling of injustice towards the women characters. Although the two women are seen as objects they are central to the plot, this is a contradiction that makes us more aware of the treatment they receive, this also heightens the feeling that the males are superior to the females as it shows their domination of the female characters. Overall I believe Shakespeare makes the female characters weak for two reasons, one is shows the subordination of women in his society and secondly, it makes the play more of a tragedy when they die because it could be perceived that they had always acted with the best intentions and they were caught up in the middle therefore it was unjust for them to die. Arjan Thethy 11.T English coursework Miss Hill ...read more.