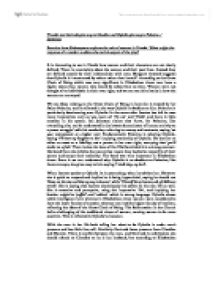 Examine how Shakespeare explores the role of women in Hamlet. What might the response of a modern audience be to this aspect of the play?

'Hamlet sees Gertrude give way to Claudius and Ophelia give way to Polonius...' Leverenz Examine how Shakespeare explores the role of women in Hamlet. What might the response of a modern audience be to this aspect of the play? It is interesting to see in Hamlet how women and their characters are not clearly defined. There is uncertainty about the women and their past lives. Instead they are defined mostly by their relationships with men; Margaret Atwood suggests that Ophelia is 'constructed by others rather than herself'. According to the Great Chain of Being which was very significant in Elizabethan times men have a higher status than women who would be subservient to them. Women were not thought of as individuals in their own right, and we can see this clearly in how the women are conveyed. We see ideas relating to the Great Chain of Being in how she is treated by her father Polonius, and is reflected in the way Ophelia is obedient to him. Polonius is particularly domineering over Ophelia. In the scene after Laertes has left he uses many imperatives such as 'you must not' 'Do not' and 'Think' and there is little emotion in his speech. ...read more.

Gertrude uses the closeness between her and Hamlet to try and manipulate him, saying 'Let not thy mother lose her prayers'. This is persuasive and emotional language; 'Let not' gives the impression that she is pleading with him, and by referring to herself in third person as 'thy mother' she is reminding Hamlet of the filial bond. 'Thy' is informal, affectionate way of addressing someone and Gertrude is using this intimate language with Hamlet partly to make him feel guilt for being distant with her. However Hamlet formally addresses her as 'you' showing Gertrude that he is still angry with her. The fact that Gertrude has to use cunning and manipulation shows that she is in an extremely difficult situation. The ghost refers to Gertrude and Claudius's marriage as 'damn�d incest' and Hamlet describes Gertrude going swiftly to 'incestuous sheets'. The Book of Common Prayer forbids women to marry their husband's brother, which is why Hamlet is so shocked and disgusted at what Gertrude has done, exclaiming 'Frailty, thy name is women!' The appearance of the ghost acts as a catalyst for Hamlet's feelings towards Gertrude. He refers to Gertrude as 'my most seeming virtuous queen' implying the opposite and subtly undermining Gertrude. ...read more.

This is perhaps reflecting Hamlet's feelings towards his mother; his conflict with her affects his attitude towards Ophelia. Tillyard suggests that 'he sees her in repetition of his mother.' Hamlet chastises women for being seductive and for making 'wantonness your ignorance'; however, he acknowledges that men are guilty too and will degrade women; 'we are arrant knaves all, believe none of us.' Ophelia is emotionally fragile as she is very dependent on the men in her life, and Hamlet cruelly telling her 'I love you not' would have a devastating impact on her. After Hamlet rejects Ophelia and kills her father, Ophelia is driven to madness, Although women were seen as corrupting to men, it would seem that in Ophelia's case it was the other way around; the three most important men in her life have abandoned or betrayed her, and as she is so dependent and repressed by them she becomes mad. In her madness Ophelia is able to express herself sexually; she sings 'He let in the girl, and when she left She wasn't a virgin anymore.' She is showing the court that she knows about sex and corruption and is not a 'green girl' as thought by Polonius. She may also be referring to how she was badly treated and betrayed by Hamlet. Ophelia also exclaims 'By Cock, they are to blame' expressing her rage at men. ...read more.