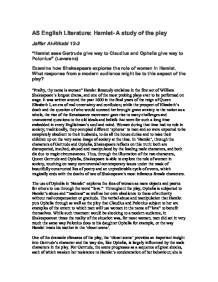 Examine how Shakespeare explores the role of women in Hamlet. What response from a modern audience might be to this aspect of the play?

AS English Literature: Hamlet- A study of the play Jaffar Al-Rikabi 12-2 "Hamlet sees Gertrude give way to Claudius and Ophelia give way to Polonius" (Leverenz) Examine how Shakespeare explores the role of women in Hamlet. What response from a modern audience might be to this aspect of the play? "Frailty, thy name is woman" Hamlet famously exclaims in the first act of William Shakespeare's longest drama, and one of the most probing plays ever to be performed on stage. It was written around the year 1600 in the final years of the reign of Queen Elizabeth I, an era of real uncertainty and confusion; while the prospect of Elizabeth's death and the question of who would succeed her brought grave anxiety to the nation as a whole, the rise of the Renaissance movement gave rise to many challenges and unanswered questions to the old ideals and beliefs that were for such a long time embedded in every Englishman's soul and mind. Women during that time had no role in society; traditionally, they occupied different 'spheres' to men and so were expected to be completely obedient to their husbands, to do all the house duties and to raise their children up on the very same image of society at the time. ...read more.

some critics argue, reflects some of the true characteristics of Hamlet, and the men in this play in general: an ability to be cruel, which is brought out here with much emphasis. Hamlet then proceeds with, "Where's your father?" which reveals his sense of unease about something and that he perhaps knows that he is being set up. Hamlet claims that he "loves" Ophelia, yet he criticizes and chastises her to such an extent that may have helped promote her madness. At the Mousetrap play, Hamlet is extremely vile. He talks of "Nothing" and the implications of the word are crude. To see also the extremes by which Hamlet treats Ophelia is overwhelming. Prior to the play, he insults her terribly and then compliments her at the play, "No, good mother, here's metal more attractive" (3.2.95), only to chastise her once again. Ophelia, being of a lower class, does nothing to escape this persecution and Hamlet seems to know this; he therefore plays off this, especially in the presence of Polonius and Claudius. One interpretation of the way Hamlet treats Ophelia at the Mousetrap play, and later on the way he deals with his mother in the closet scene, goes back to the idea of how women in the 17th century were treated like ...read more.

not pass judgement here and instead leaves Gertrude's personality deliberately ambiguous prompting much debate and argument among critics throughout the last century. However subtle, Ophelia too plays a significant role riddled with control, grief and vulnerability. She is made mad not only by circumstance but by something in herself. A personality forced into such deep hiding that it has seemed almost vacant, has all the time been so open to impressions that they now usurp her reflexes and take possession of her. She has loved, or been prepared to love, the wrong man; her father has brought disaster onto himself, and she has no mother and thus she is terribly lonely. Thus, in many ways Ophelia is the quintessence of the impact society's mistreatment of women and the deprivation of their rights as human beings has on each and every one of them. "In her meek conformity, she lives in a meaningless world until her madness relieves her of the responsibility of language and she can ignore the speech of everyone else and herself speak whatever gibberish comes into her mind" says one critic, Zulfikar Ghose, she is very much like a delicate, wilted, flower... ruled by the men in her life, Ophelia, like many women at the time, was never allowed to blossom. ...read more.