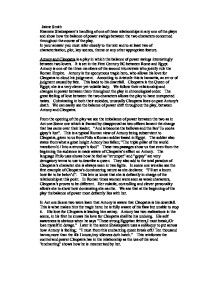 Examine Shakespeare's handling of one of these relationships in any one of the plays and show how the balance of power swings between the two characters concerned throughout the course of the play.

Jaime Smith Examine Shakespeare's handling of one of these relationships in any one of the plays and show how the balance of power swings between the two characters concerned throughout the course of the play. In your answer you must refer closely to the text and to at least two of characterisation, plot, key scenes, theme or any other appropriate feature. Antony and Cleopatra is a play in which the balance of power swings interestingly between two lovers. It is set in the First Century BC between Rome and Egypt. Antony is one of the three members of the second triumvirate who jointly rule the Roman Empire. Antony is the eponymous tragic hero, who allows his love for Cleopatra to cloud his judgement. According to Aristotle this is hamartia, an error of judgment caused by fate. This leads to his downfall. Cleopatra is the Queen of Egypt; she is a very clever yet volatile lady. We follow their relationship and changes in power between them throughout the play in chronological order. The great feeling of love between the two characters allows the play to have unexpected twists. Culminating in both their suicides, unusually Cleopatra lives on past Antony's death. ...read more.

Antony has been involved in a political marriage to Octavia, Caesar's sister. Cleopatra is devastated when she hears this news but despite hostility she wishes to be present when Antony goes to battle at sea in Act three Scene seven. Cleopatra's power over Antony, in this scene, causes him to make a poor military decision as she encourages him to fight by sea, even though he has a stronger land army. As Cleopatra is encouraging him and leading him in the wrong direction he is acting in a very immature manner and is refusing to listen to wise advice from Enobarbus and his soldiers. Enobarbus who is seen as the voice of truth to Antony his much adored leader says; "Your presence needs must puzzle Antony,/take from his heart, take from his brain, froms/ time" This shows that other characters can see how Antony's love for Cleopatra is clouding his judgement. But Antony is stubborn and keeps stating that he will fight " By sea, by sea". Clearly, he cannot see it is the wrong decision. Previously Antony was a masterful military leader so it demonstrates the height he has fallen from as he is letting Cleopatra lead him into battle blind. ...read more.

Even in Act four Scene fifteen, Antony's death scene, we are aware of Cleopatra's power over Antony. She takes control and wants to speak even though Antony is dying, interrupting his dying words; "No, let me speak" Cleopatra says this so she can have the final word, though this is not intended as she does love him. As Antony is dying he speaks about himself in the third person, giving himself a regal address to prove he has achieved honour even if it is in death. "Not Caesars valour hath oer'thrown Antony,/But Antony's hath triumph'd on itself." Cleopatra changes her tone considerably after Antony's death. She becomes very subdued and dignified which leads to a restrained end to a tempestuous scene. Cleopatra ends the play in Act five with all the power, as Antony is dead and she still has the final scene to herself which is very unusual as a female character is never given the final scene. She has achieved power over Antony in his life and his death proving she is a domineering and ingenious woman, much to the Romans disapproval. In conclusion, Shakespeare's handling of the balance of power is wonderfully documented through the plot of the play and through his use of language. The lifestyle enjoyed by Antony and Cleopatra is shown through the hyperbolical poetry. ...read more.