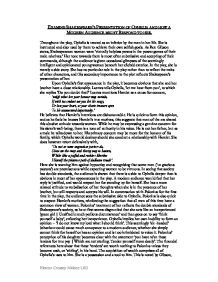 EXAMINE SHAKESPEARE'S PRESENTATION OF OPHELIA AND HOW A MODERN AUDIENCE MIGHT RESPOND TO HER. Throughout the play, Ophelia is treated as an inferior by the men in her life. She is instructed and also used by them to achieve their own selfish goals. As Rex Gibson states, Shakespearean women were 'virtually helpless pawns in the power games of their main relatives.' Her tone towards them is most often submissive and accepting of their commands, although the audience is given occasional glimpses of the seemingly intelligent and opinionated young woman beneath her clich�d exterior. In the play, she is merely a side story. She has no particular role in the play rather than to reflect the traits of other characters, and this secondary importance to the plot reflects Shakespeare's presentation of her. Upon Ophelia's first appearance in the play, it becomes obvious that she and her brother have a close relationship. Laertes tells Ophelia, 'let me hear from you', to which she replies 'Do you doubt that?' Laertes mentions Hamlet as a cause for concern, 'weigh what loss your honour may sustain, If with too credent ear you list his songs, Or lose your heart, or your chaste treasure open To his unmastered importunity.' He believes that Hamlet's intentions are dishonourable. He is quick to form this opinion, and as he feels he knows Hamlet's true motives, this suggests that men of the era shared this abusive attitude towards women. While he may be expressing a genuine concern for his sister's well-being, there is a tone of authority in his voice. He is not her father, but as a male he talks down to her. His primary concern may be more for the honour of his family, which Ophelia would destroy should she conduct a relationship with Hamlet. She does however retort defensively with, 'Do not as some ungracious pastors do, Show me the steep and thorny way to heaven, Whiles like a puffed and reckless libertine Himself the primrose path of dalliance treads'. ...read more.

Elaine Showalter accurately describes Ophelia as 'that piece of bait'. She is used to confirm whether or not Hamlet's separation from her is the cause of his madness. Before the first conversation between Hamlet and Ophelia (which is held under surveillance by Polonius and the King), Ophelia is not even given a greeting, but is spoken to only by the Queen, and exclusively about Hamlet - 'And for your part Ophelia, I do wish That your good beauties be the happy cause Of Hamlet's wildness'. Their main concern is Hamlet's return to his prior sane state and hope to be able to use Ophelia as a way of bringing it about. Ophelia herself has absolutely no control over events relating to her. She speaks briefly, only when spoken to, and to express her desire to see Hamlet well again - 'Madam, I wish it may.' Her father again talks to her commandingly, as if she were a dog, 'Ophelia, walk you here'. When she is at first left with Hamlet, she remains silent onstage throughout his long monologue, until he mentions her. A conversation begins with Ophelia's greeting Hamlet, 'Good my lord', and hereafter she uses the words 'my lord' repetitively. When she mentions 'rememberances' that she as 'longed long to re-deliver', she is shunned by Hamlet, as he says 'I never gave you aught'. Ophelia further shows the audience that she is an intelligent young woman rather than a girl who is full of nonsense. She elaborates on her feelings for Hamlet with the words: 'My honoured lord, you know right well you did, And with them words of so sweet breath composed As made these things more rich. Their perfume lost, Take these again, for to the noble mind Rich gifts wax poor when givers prove unkind. There my lord.' The audience sees here through her passionate statement that these 'words' held great importance to Ophelia and that she is expressing the depth of her emotion. ...read more.

This may be seen as Gertrude's expression of genuine sympathy for her fellow woman. Ophelia's death can be seen as a suicide, but Gertrude, perhaps to prevent Ophelia from being denied a Christian burial, which would have deepened Laertes' grief, describes her as having been 'one incapable of her own distress', suggesting that she fell in and simply did not care enough to get out. Ophelia's last influence in the play is her funeral, where Laertes jumps into her grave in grief. Hamlet however jumps in after him, and they begin to grapple irreverently, arguing over who loved her more: 'Hamlet. I loved Ophelia, forty thousand brothers Could not, with all their quantity of love, Make up my sum - what wilt thou do for her? Hamlet persists in trying to out-do Laertes in his love for his sister, to the point of ridiculousness - 'Woo't drink up eisel, eat a crocodile? | I'll do't.' This sudden display of affection for Ophelia from Hamlet contrasts hugely with his treatment of her during her life, and seems unrealistic. Laertes' grief for Ophelia is overshadowed by his desire for revenge as Hamlet has destroyed his family. The two use their 'love' for Ophelia as an excuse to let private rivalries surface, even at her funeral. This is symbolic of how she has been used throughout the play, by Polonius to get closer to the king and by Hamlet to portray his insanity. To a Shakespearean audience, people's treatment of Ophelia would have been typical of the way in which women were treated. Her silence and oppression would have been met with sympathy, as well the empathy of women of the time. While her situation with regards to Hamlet and his cold rejection of her still holds poignancy with a modern audience, people today may question more why she made little attempt to defend herself in certain situations, and why she so blankly followed the instructions of her father and brother at the expense of her own mental and emotional well-being. ...read more.